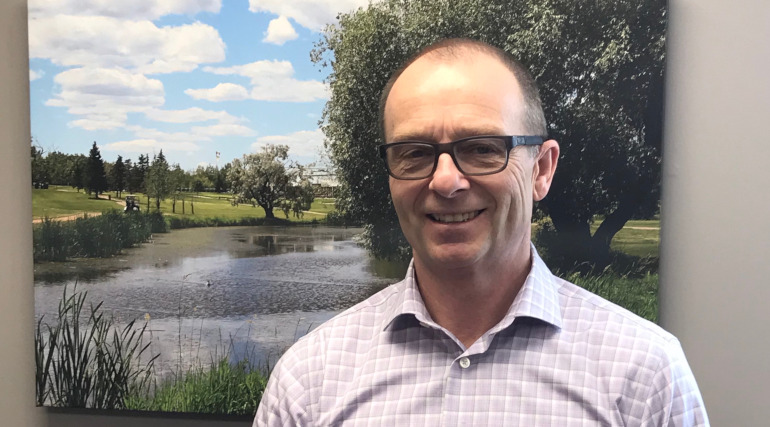 Brian Dueck is the new general manager of the Royal Regina Golf Club.

Brian Dueck has been hired as the new general manager of the Royal Regina Golf Club (RRGC).

The board of directors overlooking the province’s oldest course made the announcement on Feb. 22. The Royal Regina has been without a GM for the past six months. Dueck began his career in 1989 at the Murray Golf Course in Regina, he worked for a year at the Tor Hill Golf Course before moving to Estevan to be the head professional at the TS&M Woodlawn. Dueck took some time off golf taking over as the GM of Power Dodge in Estevan but he said returning to the industry at the Royal Regina was the perfect fit.

“I’ve always found the social atmosphere of the club intriguing,” Dueck told Golf Saskatchewan. “The welcoming feeling when you get from the membership is a great fit, when the opportunity arose, here I am.”

Head professional Dean Brown had been pulling double duty acting as the interim GM until the position was filled. The timing is important for the club as they get set for a busy year including hosting the 100 Golf Saskatchewan Senior Men’s Championship. Dueck said he is looking forward to getting started.

“Absolutely, we’re looking forward to hosting the senior men this year. We’re five years away from our 125th anniversary so looking out for that. They are doing renovations in the lounge and dining area, so yeah, it’s exciting,” he said.

RRGC president Chris Frohlick said the board of directors were confident with Brown filling the void in the interim. He said that allowed the group to find the right candidate.

“It took some time but in the end we wanted to make sure that we got the right guy in place and we’re obviously excited to have Brian join our management team. He has served as a GM and head pro for several years and he understands our market. He’s a Regina guy and understands some of the challenges we face in our market and what our club has to offer. I think he’s going to be a great fit” Frolick said.

Dueck’s already on the job, his first day was Feb. 25.