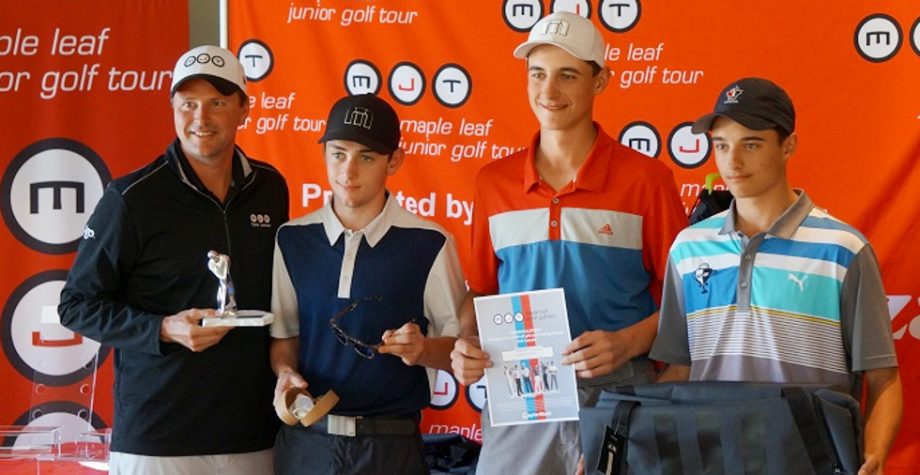 Jayden Dudas(second from left) was the juvenile boy's winner at this weekend's Maple Leaf Junior Tour stop in Estevan.

The TS&M Woodlawn hosted a stop on the Maple Leaf Junior Tour this weekend with hometown product Jayden Dudas stealing the show.

Dudas, 15, just edged out Saskatoon twin brothers; Cole and Josh Nagy to claim the juvenile boy’s division as well as posting the overall lowest score of 144. Dudas was two strokes back of Cole Nagy after round one but the Estevan product shot a spectacular 68 on Sunday to finish a shot up on Nagy. Josh Nagy finished third with a two-round total of 146, just a pair of shots back.

The juvenile boy’s division featured 19 athletes, all but two were from Saskatchewan.

12-year-old Yorkton golfer Ella Kozak was a winner again, she followed her Under-15 girls win in Portage la Prairie with another victory in Estevan. Kozak shot 83 and 91 for a two-round total of 174, 18 shots better than Regina’s Autumn Neiszner.

The junior boy’s category also saw a winner from Saskatchewan, Swift Current athlete Griffin Wilson won by six strokes over Deer Valley’s Cole Obrigewitsch. Wilson shot 80 on day one but blazed through the Woodlawn on the second day carding a 69.

Carey McLean was the top Saskatchewan finisher in the 15-18 girl’s division. The 16-year-old posted rounds of 88 and 84 for a two-day total of 172, she was 11 shots behind Victoria, British Columbia’s Sarah Phipps.

The next Maple Leaf Junior Tour stop in the province is in Lloydminster on June 2 and 3.

Each tournament allows players to earn points in the Order of Merit standings, see the updated rankings here.