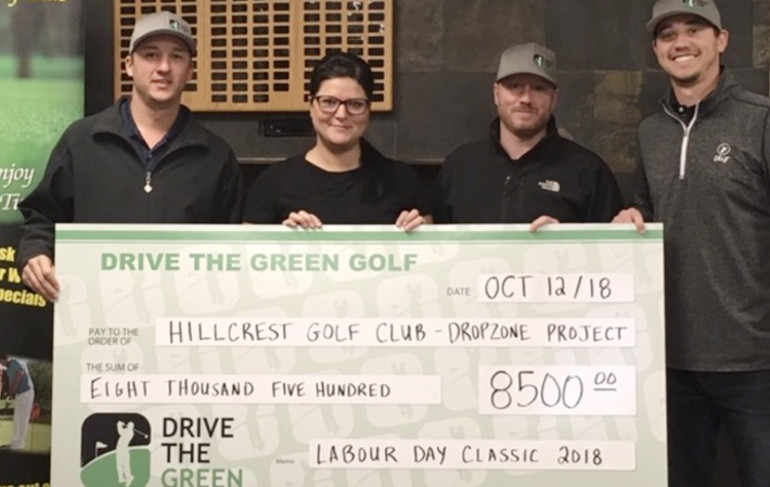 Drive The Green Golf presents Jasmine Jackman from the Hillcrest Golf Club with a cheque for $8,500 to the DropZone Project. (Submitted photo)

A love of golf has led three Moose Jaw golfers to get more involved in the sport.

Drive The Green Golf is a local golf media company that’s making waves in the provincial golf community, through a podcast and website, as well as tournament organizing.

Last month, Drive The Green hosted the Labour Day Classic at the Hillcrest Golf Club in Moose Jaw and the $8,500 raised from that event was recently donated to the Hillcrest’s DropZone Project.

“We thought it was a perfect opportunity for us to get our name out there as to what we can do and then also, we’re members at the Hillcrest, so we wanted to put on a tournament to raise funds to get new bathrooms,” said Hetherington.

“[The tournament] was an unbelievable success for the first year, we had over 100 golfers in it, it was a two-man scramble tournament that was a unique style tournament. We’re happy it worked out really well and the course is happy.”

The DropZone Project is to install new bathrooms at the Hillcrest, which is something that is much needed at the facility.

Hetherington said they were very happy to help contribute to the project, “After putting the $8,500 in, they up over $15,000, so they’re getting close to their end goal, we’re glad that we could help out,” he said.

Through Drive The Green, the goal is to run more tournaments similar to the Labour Day Classic next season and help out local organizations. Hetherington said they can provide scoring features and everything that someone needs to run a tournament.

“We have the ability to use Golf Genius, they’re a scorekeeping app that we use for the tournament to help streamline things a little bit,” he said. “There are lots of people that put on corporate events or fundraisers, those types of things and we’re more than happy to help put on a good event.”

In addition to the tournament organizing, the trio at Drive The Green also want to shine a light on golf in Saskatchewan and Canada, including putting together a “Top-Five Golf Courses in Saskatchewan” ranking.

Hetherington said Saskatchewan and Canada have more than meets the eye when it comes to the sport and they’re hoping to highlight that.

“We have a Canadian focus, we’ll do a weekly recap of how they did (on the PGA Tour) and we did a Top-Five Saskatchewan Courses article and we’re hoping to expand that a little bit and bring more of a focus on golf in Saskatchewan,” said Hetherington. “We got some pushback on courses that didn’t make the list, so we’re hoping to make it an annual thing, do some course reviews next year and help drive some exposure to the hidden gems across the province.

“We’ve also linked up with a PGA Tour professional out of New York to provide some tips and things like that,” he added.

For more on Drive The Green, check out their website at drivethegreengolf.com.

The golf season in Moose Jaw wrapped up on Wednesday with the final rounds happening at the Hillcrest. The Lynbrook Golf Club closed out its year over the weekend.