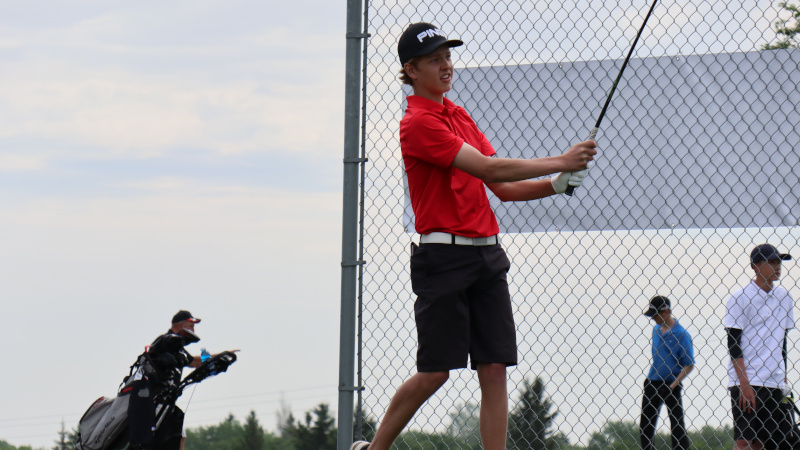 Estevan's Chase Gedak is tied for second at the Prairie Championship in Yorkton.

Round one of the Future Links Prairie Championship, driven by Acura is complete at Yorkton’s Deer Park Golf Course.

Calgary’s Richard Dou set the pace on day one of the three round event with a two-under par, 70. The Pinebrook player scattered five birdies over his round to stake a three-shot lead over a pair of Saskatchewan golfers. Saskatoon’s Josh Nagy of the Riverside Country Club (below, right) and Chase Gedak (Estevan, TS&M Woodlawn) each carded rounds of 73, one-over.

18 Saskatchewan boys are in the field; the complete leaderboard can be seen here.

On the girl’s side, Sherri Yang of Richmond, B.C. will sleep on a round one lead. The Mayfair Lakes Golf Club member has a two-shot edge on fellow British Columbian Hyeji Yang. Sherri shot one-over 73, Hyeji posted a solid 75, plus-three.

Calgary golfer Brooke Frerichs is in third at plus-five, Ashley Chow is fourth at eight-over, Abby Chow rounds out the top five at nine-over par.

Six Saskatchewan girls are competing in the 54-hole tournament, Creighton’s Lauren Fox (left) leads the way of locals in sixth. She shot a 10-over, 82.

Round two will begin at 7 a.m. Saturday in Yorkton. The final round goes Sunday.

The top five boys and top five girls (plus ties) will earn a qualifying spot at the national junior championships.