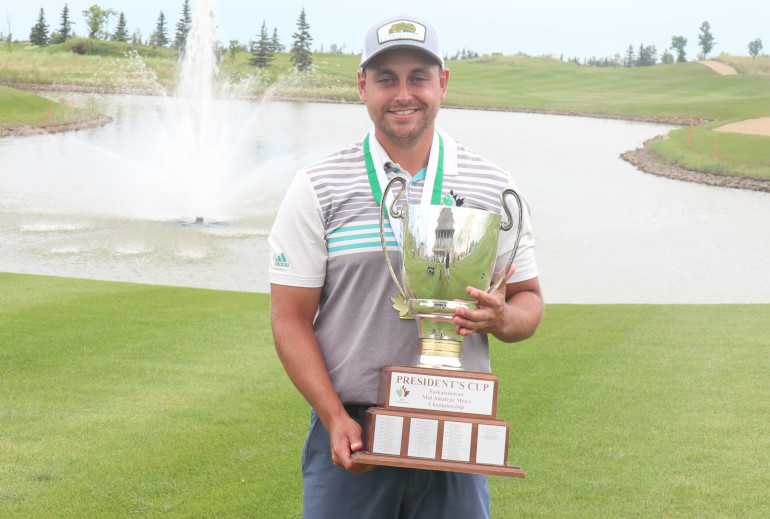 Danny Klughart is the 2020 Mid-Am champion.

The Cooke Municipal Golf Course member chased Kris Wasylowich’s course record of 61 in Warman before resting at 10-under, 62 in the final round of the mid-am event. Klughart left the field in awe with a seven-shot win over North Battleford’s Scott Thompson with a three round score of 205. 36-hole mid-am leader Justin Wood of Unity placed third at 3-under par.

The complete leaderboard of the championship can be found here. The mid-am championship is open to players 25 years and up.

The final round of the men’s amateur will be played Friday at The Legends. 21 players made the cut of 4-over par after the 54th hole. The first tee time is 9:10 a.m. The final group with Klughart, Scott Thompson and amateur co-leader Ty Campbell begin their rounds at 10:10 a.m.

Shell Lake’s Brooklin Fry is a back-to-back champion as well except the 15-year old’s wins came within two weeks.

Last week in Swift Current Fry won the Saskatchewan junior girl’s championship. On Thursday Fry came from two shots down to win the provincial amateur women’s title as well in Warman. Trailing defending champion Kathy Ziglo going into the third and final round Fry birdied the opening two holes and cruised to a 1-over 73. She ended up taking the event by six strokes over Ziglo who finished at plus-13.