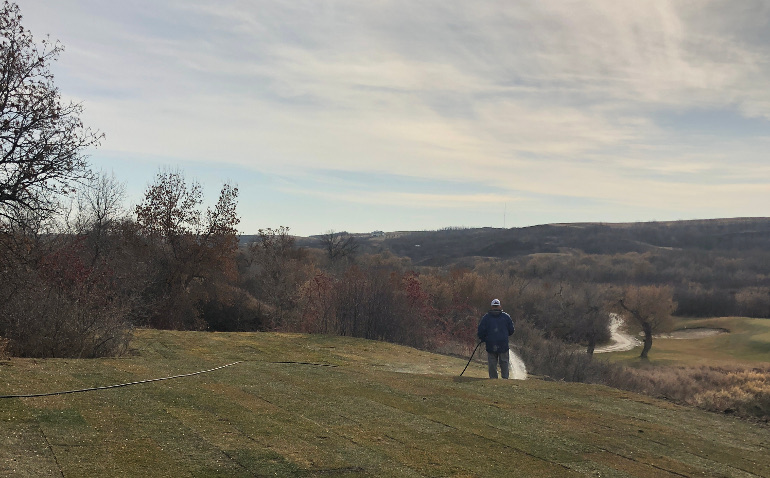 For the past seven or eight-years Deer Valley Golf Club has been dealing with water issues in the Qu’Appelle Valley, over the years the public club has lost several greens and tee boxes but work to rebuild their facility are well underway.

John Greenough has been around the course since it’s inception in 2001. He has been the head pro since 2011. He said several holes have seen recent work.

“We had quite a few wet seasons in a row with a high water table,” Greenough told Golf Saskatchewan. “We had some movement along the hillsides effecting several holes. Number two we lost a few tee boxes, number nine we had a severe shift in the middle of our fairway and number 12 we had a shift in our fairway and a ripple that went through our 12th green. Our 13th hole, the tees and fairway were effected as well.”

The ninth fairway is now a two-tiered hole. The courses’ signature hole, number two now has seven tee boxes in play. The tees on hole 13 are also rebuilt. Deer Valley hired Glen Campbell to assist with the 12th hole. Greenough said that work is currently underway.

“The membership was excited to see 12 was out of play and to see some work on it. I was gone for two days at the buying show and it’s amazing what he has done so we’re pretty pumped for next year,” he said.

The course had closed in early October due to poor autumn weather, but the club reopened until last weekend. Greenough was happy with the turn in the forecast, so the members and public could see the upgrades before they closed for the year.

“The weather was terrible so we closed and then we reopened so we got another week of golf in. The nice thing about this is the membership got to see sodded tees, they got to see the finished product. We received lots of positive reviews which is why we do it,” he said.

All the renovations will be complete for next year’s playing season. The 12th green will be the last project completed, Greenough said June of next year is the projected date of completion depending on the weather. Although the hillsides of the valley have caused issues for the 18-hole course Greenough said their backdrop makes the club a picturesque spot to play.

“I think the reason people love coming here is the unique landscape for Saskatchewan. We have some elevated holes, more elevation than most courses. We’ve got a beautiful view in the valley and some of the most challenging greens that I’ve played in the province,” he said.