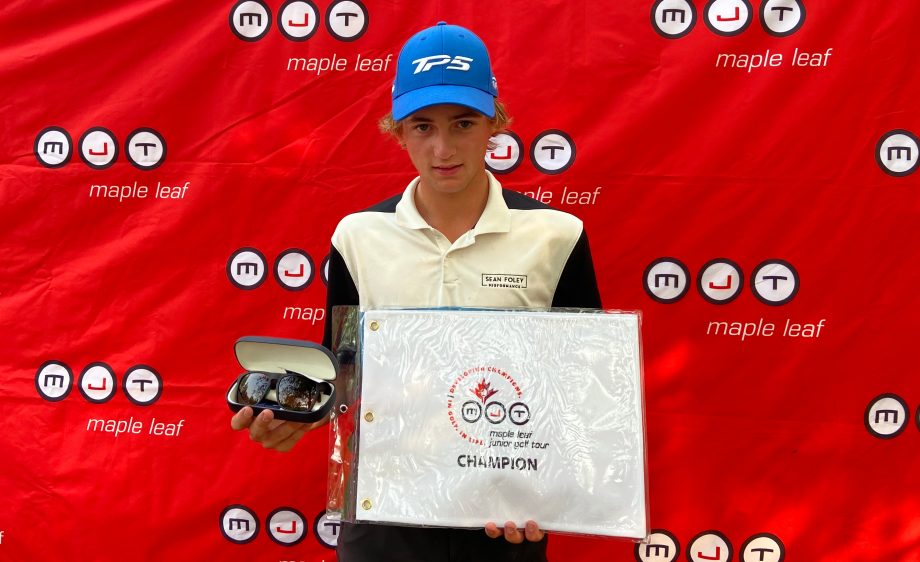 The 16-year-old carded rounds of 70 and 69 on July 26 and 27 to win the overall low score and the juvenile boys age group. Danielson was 11 strokes better than Saskatoon’s Max Regier over 36 holes. Estevan’s Ryan Chernoff, Darien Herlick of Weyburn and Saskatoon’s Walker Cote all shot 151 tying for third place in the age group.

Medicine Hat’s Sam Bratvold (above) was just two strokes shy of Danielson’s overall low but his 141 (70, 71) was the winning score in the junior boys division. Chase Pochylko of Saskatoon and Theoren West of Wawota were a shot behind at 142. There was a three-way tie for third with Davin Bourassa (Radville), Zachary Szakacs (Corman Park), and Hunter Kutcher (Regina) at 143.

In the peewee boys age group Aricin Franklin (above) posted the lowest score by four shots. He carded rounds of 72 and 79 for a 36-hole tally of 151. Adam Muntain of Regina was second. A logjam of players tied for third at 157 including Kai Kriekle (Regina), Shae Maunula (North Battleford), and Lucas Sturgeon (Saskatoon).

Kyle’s Chloe Wills (above) continues her breakout season on the MJT. The 13-year-old Kyle golfer shot rounds of 88 and 83 to claim the under-15 girls group. She beat Tayla Perry of Regina by 12 shots. Sarah Henderson of Saskatoon rounded out the top-three at 192 (92, 100).

Saskatoon’s Symone Ripley (above) picked up the win in the 15 – 19 girls category. Ripley fired rounds of 82 and 80 to win the division by five shots over Hallie Crozier of Regina. Turtleford’s Devrie Bloom placed third at 180 (92, 88).

The next Saskatchewan stop on the MJT is Aug. 14 – 15 at Elk Ridge Resort.