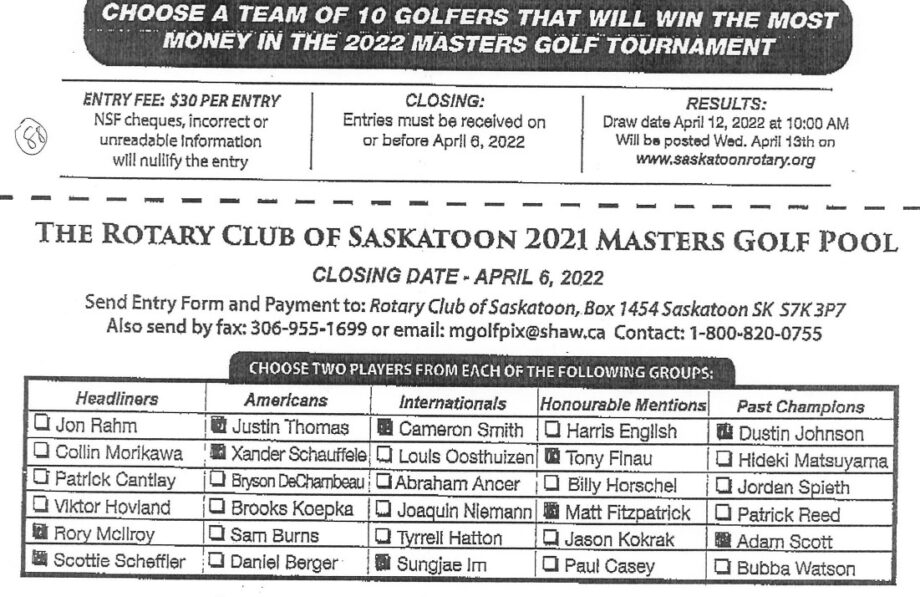 Ned Ramsay of Cut Knife had the winning combination in this years Rotary Club of Saskatoon Masters Pool.
Clark Stork

Cut Knife area farmer Ned Ramsay and two pool buddies are this year’s winners of the Rotary Club of Saskatoon’s Masters Pool winners. Ramsay also had the winning picks in the 2017 version of the fundraiser as well.

Ramsay, a member of Atton’s Lake Golf Club also had an entry place fourth in the pool that included 365 entries. He admitted to doing plenty of research reading websites and predictions from “people that know way more about the game than me.” He said a key to earning the most prize money in the pool format is making sure you pick the winner and have some luck.

“You need the winner first of all, you have to find that winner,” Ramsay told Golf Saskatchewan. “The thing that saved us was Rory [McIlroy] climbing the leaderboard, if he didn’t do that, we might have cashed but we wouldn’t be where we were at. We had him and [Scottie] Scheffler in that first box and that really helped.”

Ramsay has entered the Rotary Club’s pool every year since it’s inception, so his odds of winning have been elevated. He also said the Masters is his favourite tournament and attending Augusta National is a bucket list item. He even joked that the pool winner used to receive their own Masters flair and he wishes that continued.

The trio of golf fans are enjoying the win and have already reinvested some of their winnings in the community’s Stanley Cup playoff draft with proceeds going to Cut Knife’s bowling alley.

As for Ramsay’s home course of Atton’s Lake, he said “it’s a beautiful nine-hole regional park course that I’ve yet to par but will continue to play and hopefully put it all together one day.”

A portion of the proceeds from the pool is given to Golf Saskatchewan to assist in funding junior golf programming.