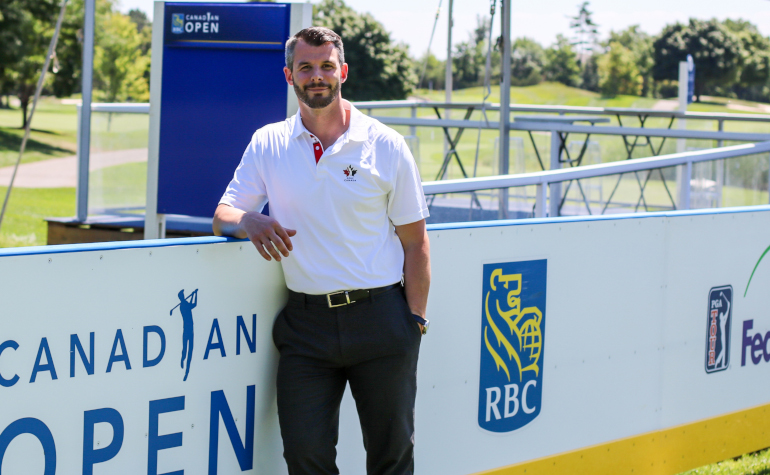 Hamilton’s Bryan Crawford is new to the golf world, but the long-time Canadian Football League player is no stranger to the world of sports. Most recently he was part of the business and operations crew with Basketball Canada, prior to that Crawford spent eight years running championships for Canadian universities across all sports. He’s now the Golf Canada tournament director for the RBC Canadian Open.

Crawford said a new vision from outside the golf world is something he wants to bring to the event that will take place at the Hamilton Golf and Country Club next month.

“The business of sport is the same regardless of the shape of the ball or the size of the playing surface,” he told Golf Saskatchewan. “It’s really more about aligning people, getting all the stakeholders pulling in the same direction and getting people to rally around a vision and kind of being creative in being able to look at things through a wide lens with other sports in mind. We want to apply those things in our environment.”

The tournament is coming off a fantastic 2018 event that saw RBC team member Dustin Johnson win his 19th PGA Tour championship. The Tour has moved the Open date to early June (3 – 9) which aligns with the US Open. Crawford said those aspects have helped pave the way to this year’s event that is well ahead of schedule regarding preparation.

“The momentum has accelerated and that was really the task coming on board is how to take all this positive energy and excitement and momentum and funnel it and direct it and grow it. We have a lot of stakeholders and partners that were fully on board to see that happen. We shared a common vision for what the event could be, we kind of needed to tie those people together and make sure everyone understood we had the same vision,” Crawford continued.

The date change has had a positive impact on the field of golfers. In previous years the British Open conflicted with the lone Canada stop on the Tour but now golf fans will see the best of the best. Back-to-back PGA Championship winner Brooks Koepka, Rory McIlroy, Bubba Watson, Matt Kuchar, and Jim Furyk are all confirmed as well as Johnson. Crawford said the field is going to be the best in recent memory.

“Our field is shaping up to be one of the strongest we’ve ever had,” he said. “Having three of the top four players in the world and we will have more commitments in the next two weeks. Our RBC team athletes are having tremendous seasons, the Canadians are playing outstanding, having another winner like Corey Conners is a great addition. We couldn’t ask for a better line up out on the course.”

The date change has also revamped the overall image for the tournament. The marketing team has come up with the theme of Summer’s Open. Crawford said the over 100,000 expected spectators can use the festival like event as a kickoff to summer with the new ‘Fare Way” of cuisine and concert series headlined by country music stars Florida Georgia Line.

“We wanted to make it a sports and entertainment event and something that was a can’t miss on the calendar that appeals to more than the hardcore golf fan. To get people out to experience the event and saw wow! That was a really cool event and I’m not even necessarily a golf fan. That’s the key, converting people and giving them a reason to be here and realize the RBC Canadian Open is fun to be a part of,” he said.

Many Saskatchewan residents received the opportunity last August to witness a professional golf event when Brooke Henderson won the CP Women’s Open at Regina’s Wascana Country Club. For thousands, that was the first time attending a professional championship. Crawford said if you are making your way to Hamilton for the 2019 Open experiencing the “rink” is a must. The concept was awarded the Best Element of Tour last year by the PGA.

“Absolutely, unequivocally, you have to check out the rink,” he beamed. “For those that don’t know about it, it’s the hole that we theme around hockey. We build boards around the par 3, 13th hole here in Hamilton. The marshals are in referee jerseys, we have goalie masks as tee boxes, an ice cleaning machine, we have hospitality structures built with our partners, people love to hang over the boards and bang on them to celebrate great shots onto the green. It is one of the most exciting parts of the event.”

On the Monday and Wednesday of the week there is going to be junior golf experiences for 1,000 kids to be a part of some of the practice rounds. The opening day of June 6 is also the 75th anniversary of D-Day. Veterans are going to awarded free admission for the day, there will be a special ceremony ahead of the championship and a flyover conduction by aircraft through the war plane museum. Crawford said there is an aspect of the event for everyone and his vision for his first tournament in the role is clear.

“Our objective is to come in, for our whole team is nothing short of being the best one we’ve ever hosted. I think that has been the goal and belief and we’ve already done a great job to set a high bar for the event. We feel pretty good that come the 10th of June we will have achieved a really good result that we can build on for 2020,” Crawford concluded.