CP Women’s Open volunteers the true stars of the show 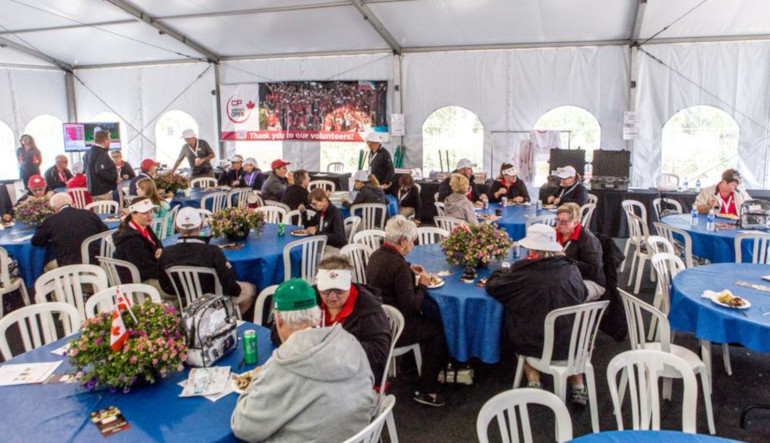 Over 1,100 people from across Canada and even the United States volunteered at the CP Women's Open.

In August in Regina the CP Women’s Open welcomed the world’s best female golfers to the Wascana Country Club for the LPGA event, the first time the tour has visited the province.

History was made when Brooke Henderson became the first Canadian to win on home soil since 1973, nearly 50,000 spectators took in the championship making the event one of the most attended in tournament history. However, none of this would be possible without the over 1,100 volunteers that gave up a week of their short Saskatchewan summer to be a part of history. Bernadette McIntyre is a long-time volunteer in the province mostly for curling events, but she wanted to be involved in the Open along with her co-chair Karen Pasterfield. The two Regina women have worked together for years chairing events including Briers, the Memorial Cup and Grey Cups. McIntyre said they had plenty of help among the different areas of volunteering.

“The co-chairs of each of the committees we had were fabulous,” she said. “Everybody stepped up and did an amazing job.”

The largest group of volunteers needed was marshaling, 500 people performed those tasks through out the event. Both scoring and transportation needed over 120 people involved and other committees varied from six to 60. Security, golf carts, hospitality, sales, practice facility, 50/50 sales, and other committees were all coordinated with rousing success for the six-day event. McIntyre said the hours were long and the work was tiring for everyone involved but the response from the volunteers was overwhelming.

“Golf Canada does a survey of the volunteers after, I believe it was a 94 per cent satisfaction rate. They said that was one of the highest they’ve had for volunteers working the CP Women’s Open,” McIntyre said.

Rounding up over 1,100 volunteers took a little longer than more familiar events the city and province have hosted. Asking residents to take a week of their already short summer is harder to do than getting people to sign up to help put on a Grey Cup in November or the Brier in March but McIntyre said Saskatchewan stepped up and once again showcased prairie pride.

“Lots of them took holidays, gave up a week of their summer time to be part of this, that’s phenomenal. In the winter we need something to do to get us through, we have beautiful summers here in Saskatchewan and these people came and worked their hearts out and really had a good time,” she said.

Aside from McIntyre’s relatively minimal experience in the game of golf, she admitted there was some nervousness leading up to the opening round of competition. She said once the gate opened on the first day of competition the sight took the nerves away.

Volunteers are the heart & soul of any event!

Today (Wed., Dec. 5th) is #InternationalVolunteerDay – and we'd like to celebrate and thank our #CPWO volunteers. Our event would not be possible without you.

Learn more about joining our volunteer team at https://t.co/K2NFOMncxZ pic.twitter.com/2jfgchmRmp

McIntyre focused her efforts towards the areas of the volunteers that all events need such as security, transportation, communications, and safety. Pasterfield is a member of the Wascana Country Club and an avid golfer. Her role was focused more on golf and the tournament play including looking over the 500 marshals and 150 people at scoring tents across the grounds. Giving back to the Wascana was part of her mandate but she said being part of any major event is a special feeling.

“When something of this magnitude came with golf it was a no-brainer,” Pasterfield said. “We wanted to get involved and not only show off the Wascana and Regina but Saskatchewan. As a volunteer that’s always your main focus.”

Pasterfield has experience volunteering at PGA Champions Tour events in Hawaii where she spends parts of the year, so her expertise was a great fit during the LPGA event. One worry with a golf tournament rather than a football game or a curling bonspiel is dealing with weather. Pasterfield said they needed cooperation for about a year leading up to the event and the Wascana didn’t get it.

“We depended on Mother Nature to behave for a year, not just the week of the event and she didn’t,” she said. “We had to almost rebuild the Wascana as a result of a ridiculous winter. It was much more challenging when you have no control of the conditions.”

The players did play “preferred lies” during the tournament but overall the course conditions did rebound. Prairie winds rolled in through out the 72-hole tournament as well providing a challenge to the professionals.

Pasterfield said the course will always have the history behind it now that Henderson was the winner, but a new generation of golfers could spawn through both the volunteers and the spectators, especially kids.

“We had a wonderful program, ‘Brooke’s Brigade’ that was sponsored by Golf Town that brought junior golfers out in droves. You’d see these little monkeys walking around the course following Brooke in their t-shirts. The pros during the Pro-Am had the juniors play with them on a hole and they got to putt out, so it really opened the eyes to junior golfers for sure. It introduced golf of that caliber to certainly the citizens of Regina and the province,” she said.

Souvenir sales were three times higher during the Regina based event, the $2 million charitable goal set by CP was reached before the event was over, the cheque presentation was made on championship Sunday. Pasterfield said those highlights perked the ears of Golf Canada and the event could very well make its way back to our province.

“They just didn’t understand how big an event like this is supported by the local people. It all spoke volumes about them coming back to Saskatchewan. They will be back,” Pasterfield vowed.

The volunteers were not only Saskatchewan and Regina based. Pasterfield credited other southern Saskatchewan golf clubs for stepping up, she said people from all the western provinces volunteered, yearly volunteers from across Canada were involved and people from both the Dakotas traveled north of the border to lend a hand. Much like McIntyre, the lasting memory Pasterfield said she has is the Thursday morning although she saw it from a television screen.

“We were in a meeting and the Golf Channel came on the TV, not only were we seeing the Wascana featured on the Golf Channel internationally, but the shot was the people coming. It was mind blowing, it was very moving,” she said.