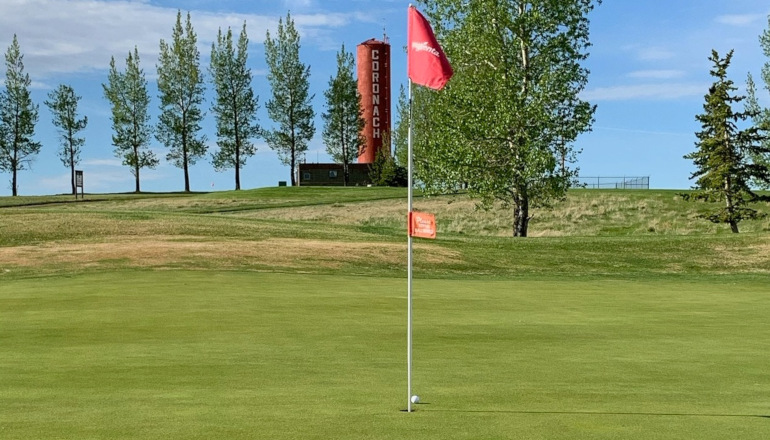 The Coronach Golf Club is located in the rolling hills of south-central Sask.

Built in the mid-1950’s in the rolling hills of southern Saskatchewan lies the Coronach Golf Club. The course started with three holes and sand greens before expanding to the course’s current nine surrounding the town’s water tower.

In the 1980’s the club upgraded their watering system on the fairways and in 2001 their biggest achievement was brought to fruition with the conversion of the greens to grass. Club president and long-time volunteer and community member Dennis Hicks said their golf club is woven into the fabric of the community.

“Originally we’re the ‘best town by a dam site,’ there is the Westmoreland Coal Poplar River Mine here so there’s a dam outside town, that’s our little lingo,” Hicks explained. “Coronach is a little town, a great place for families. The course is really friendly to all types of golfers, it’s not overly tough, but if you look for trouble you will find it easy enough too.”

According to the club’s profile on Tourism Saskatchewan’s website, the course is links style, features magnificent fairways, native grass roughs, and elevation changes from hole to hole. The greens conform to USGA standards. The course plays from between almost 2,500 and 3,000 yards between the blocks with the course rating varying between 32 and 37. The slope is a minimum of 102 to the maximum of 125.

Hicks said their par-three, hole four is the most picturesque on the course as it looks downhill about 150 yards.

“Number four is on top of a hill looking down, that’s kind of our signature hole,” he said.

The course will play their men’s league this year under the current COVID-19 guidelines. Hicks said they average about 30 players a week. The club had 22 players on Wednesday for their first league day of the year. The course has had couples’ nights in the past. Despite a downturn now with junior players the community has had some solid success in the past.

“We’ve had a strong junior program throughout the years. Our junior ladies won the provincial high school team championship about four or five years in a row (2010 – 13). We’ve had a lot of strong junior golfers, but we’re kind of in a lull and we’re hoping to gain a few more because there isn’t much else to do. It goes in cycles and it seems like if the parents golf the kids do too,” Hicks added.

The big draw to the course over the years has been the “Big Hole” event. The event doesn’t occur anymore, but the club launched the Alice Grace Fundraising Tournament with great success last year. The proceeds of the event went to the club and organizations that support people living with Down Syndrome. Alice is the daughter of one of the Coronach course members.

“It’s was in late August and a big success,” Hicks said. “Hopefully we can hit that again but who knows wit the current restrictions.”

Overall Hicks said the town and area is proud of the local volunteerism and pride in the course and welcomes anyone to come play and experience the facility.

“It’s well maintained, family-friendly, it’s not a pro course but it’s fun and enjoyable. Greens are in good shape, nice watered fairways, it’s an enjoyable round,” he concluded.