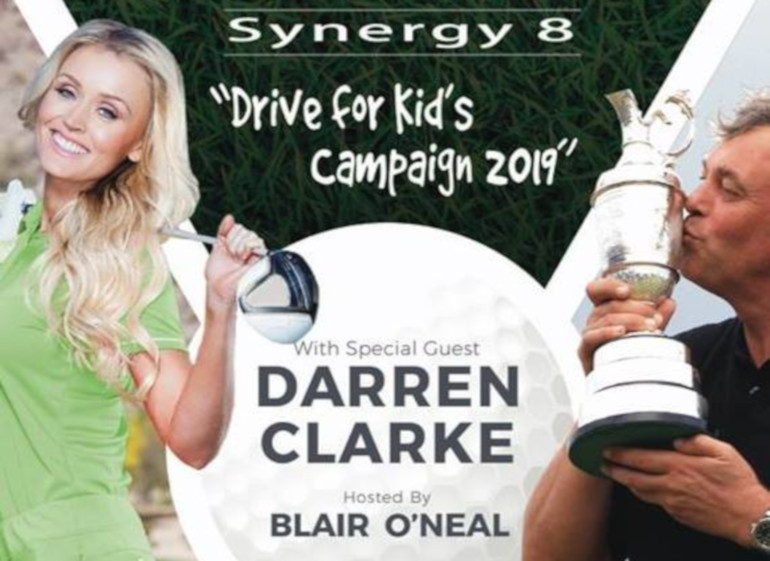 Synergy 8 Community Builders has announced their 2019 keynote speakers for their annual “Drive for Kids Campaign” later this summer in Saskatoon.

Former professional golfer and current analyst, Darren Clarke and professional and Golf Channel host Blair O’Neal will be in the Bridge City on Aug. 27 for the 11th year of the event. Campaign chair Troy Davies said Clarke comes highly regarded by previous golf attendees at the fundraiser.

“Darren comes highly recommended from Retief Goosen and Colin Montgomerie, two former guests we’ve had over the last two years. They just pointed out to us, with our event and the uniqueness of it having the dinner the same night Darren would be a huge hit to the audience. They’ve got a feel for the Saskatchewan folk, so we took their word. We reached out to Darren and he was more than willing to come,” Davies said.

Having O’Neal make an appearance is important to the committee as well Davies explained.

“She is highly regarded on the Golf Channel and their Morning Drive and she’s also a professional golfer which a lot of people don’t know,” he said. “To bring in a female professional is important to us because we think golf is making an impact. Even after the huge win by Tiger Woods I’d say more people are going to pick up clubs. It won’t be just men; it will be females as well and we want to promote both sides of the golf.”

National Hockey League players Cam Talbot and Eric Gryba will also be back this year to help raise money for the Jim Pattison Children’s Hospital Foundation. Synergy took advantage of the growing golf market in Saskatoon back in 2011 when they brought John Daly to the city for the event. Since then they have reached out to other PGA Tour players and it’s helped them raise over $4 million Davies said.

“It’s really turned out to be a homerun for us with some of the names we’ve brought into the city. The feedback we’ve received from our corporate sponsors is that it’s been a success thanks to them. It takes corporate support to make this event happen. We’ve raised over $4 million and made a huge impact to the community,” he said.

The province’s children’s hospital is slated to open later this year. Then premier, Brad Wall announced the construction of the much-needed facility at Synergy’s event in 2010. This year the organization is hoping current Premier Scott Moe will attend and potentially make an opening date announcement. The group is still in discussion with his office. Whether that comes to fruition is still in the works, overall Davies said they have been blessed to work in conjunction with the foundation over the years.

“It’s a great fit for us, we have the same beliefs. Our goal this year is to purchase all the pediatric equipment in the trauma room, that’s what we will be focusing on,” Davies said.

The golf tournament is held at The Willows, the banquet takes place at Prairieland Park. Anyone who purchases a golf foursome receives a table of eight for the gala. Ticket and sponsorship details can be found on the Synergy 8 website.