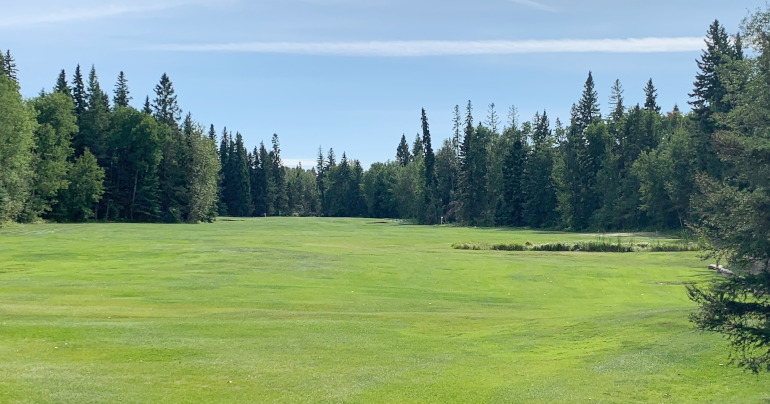 The Rings are amid 27 years owning Chitek Lake Golf Course and this year the couple is celebrating a monumental year.

The club cut into the northern Saskatchewan forest turns 50 this year.

The golf course was originally constructed by Hector Trout in 1970. The Saskatoon teacher carved five holes out of the forest and charged $1 for ten holes. The trees that were taken out by Trout during construction were used to build cabins at the lake and the clubhouse that still stands today. Golfers used two different tee boxes on hole five to fill ten holes. Hole five is now the ninth hole. Sandra Rings owns the course now with her husband Jim and remembers playing the course growing up. After careers in the mining industry the couple purchased the course and have been there ever since.

The course plays between 2,740 yards and 2,865 through rolling hills and plenty of trees, water hazards and rough. Jim said the nine-hole course is tricky and hole one provides some false security.

“You look down number one and you get this false sense,” he said. “It’s nice and flat and looks wide although people find the bush anyways. Two is much the same but as you work your way around and you get into the hills. You need to keep the game between your ears.”

The course features three par threes including a 225-yard tee shot on hole seven. There are a trio of par fives and three par fours. After a round Jim said the feedback is usually pleasant.

“We get a lot of compliments from people who haven’t golfed here before or maybe come once a year. Boy this is a beautiful place and it’s well kept. I guess we’re doing something right, they come back,” he explained.

The course is up for sale as the Rings would like to retire. The couple admits the years fluctuate but they don’t regret making the purchase 27 years ago.

“It’s been a nice place for us,” Sandra said. “We live here 12 months of the year, yeah we share it big time from May to the end of September but you’re always happy to get going in the spring. It’s worked out well for us. You make a lot of friends, people you would have never met otherwise,” she said.

Golf Canada uses significant milestones such as 25, 50, 75 or 100 years as celebrations. The Rings were new to the golf industry during Chitek’s 25th anniversary. The couple is proud to still be in business at half a century.

“For people to be happy about 50 years, oh my god it’s 50 years, there’s some satisfaction to that. We’ve kept it open through all these years,” Jim said.