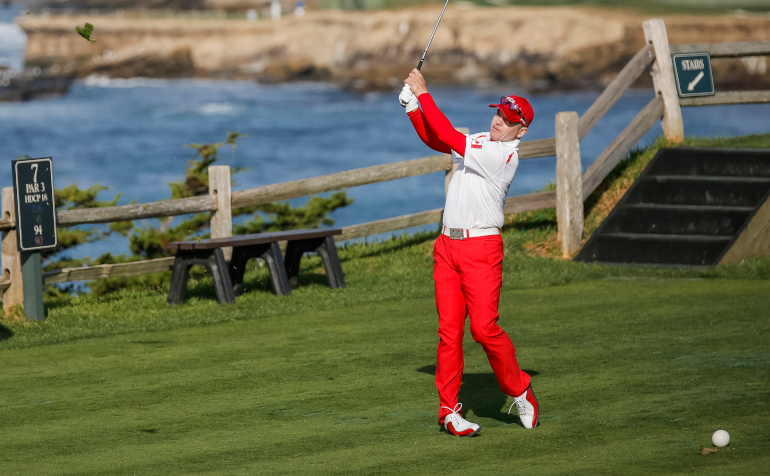 David Dube has a passion for golf, and helping others.

Anyone familiar with the city of Saskatoon has likely heard of the Dube family.

The well-known business owners have made their mark on the Bridge City with their company, Concorde Group Corp. but they have reached many more Saskatchewanians through their tireless philanthropy work, especially within health care and support. The family has contributed millions of dollars towards the Jim Pattison Children’s Hospital which is nearing completion as well as many efforts towards mental health awareness. David Dube, the company’s president and CEO is also an avid golfer, in fact he adores the game.

An active athlete as a child, Dube played some junior golf but took up football in high school and essentially got away from golf. He did however rehash his passion for the sport after college when he was working in California. Dube spent four to five days on a course with colleagues, one who was a former college and mini-tour professional. He admitted playing with someone much more superior took its toll, but he looked back on some advice his father, Leslie gave him as a youngster.

“When you get to play with someone dramatically better than you it makes me realize what my father told me when I was young. We played billiards together and I was a banger, I hit everything hard,” Dube laughed. “One night he said to me, it’s a lot more fun when you are good at it. Try to get good at it and you will have more fun. I’ve taken that lesson in pretty much everything in life but, particularly in golf.”

Dube, 55, competes in the provincial championships and has dropped his game to about an eight handicap, a far cry from the 20 when he returned to the game after college. He is proud of his improvement over the years but says golf is special because it is a game for life.

“I got the hook when I realized this is something you can do for life,” he said. “I tell people all the time, it’s the only game in the world you can play competitively with your son or daughter. Every other game you can’t, you can coach them, you can do this and that but in golf you can go play the amateur and you can be in the same foursome. I don’t have any kids, but I just think it’s such a great game because you can be competitive at any age.”

Not only is Dube a huge fan of the game, he tends to dress the part. He admitted he has more golf shoes in his closet than other kinds of foot wear he’s owned in his life, combined. He joked that he spends more time working on outfits for the course than how he’s going to play that day.

“When I first figured out you could get your shoes customized by Footjoy, that was like an epiphany for me. Usually they are stress buys, if I’m stressed about work or something I will go online, and I find more golf clothes or I will find different coloured shoes that I want to go with an outfit or three. It’s become kind of legend, I think I have 50 plus pairs of golf shoes. You better be able to play a little bit if you are going to wear some fancy shoes out there,” Dube said.

He does retire them to Golf Saskatchewan hoping they land on the feet of a player that maybe can’t afford to supply their own.

In 2008 Masters champion Mike Weir was in Saskatoon for an event to raise money for the children’s hospital. The Concorde Group was the title sponsor and Dube was able to spend part of the round playing with the Canadian icon. Through the event he then purchased an auction item to have a chance to caddy for Weir during a PGA Tour event in Phoenix. From there he was hooked on professional golf and started getting into some Pro-Am events on the tour including the Phoenix Open two years in a row.

“The first one I played was with Rocco Mediate and Rocco is such a great character on the course. The next year I played with Hunter Mahan. You got to meet the guys and spend some time with them. When you get 18 holes with a guy you know more about him in 18 holes than if you were his neighbour for 10 years,” Dube said.

Dube’s team finished in third place back-to-back years. He is a regular at the Canadian Open Pro-Am but now he’s gotten a chance to play at the AT&T Pro-Am, he considers that the ultimate experience for an amateur player. Upwards of 60,000 people attend the event. When asked about the nerves prior to a shot he said the spectators aren’t there to watch him play.

“It’s quiet, everyone is quiet. It can either unnerve you or how is it any different from playing your Saturday round with your buddies. It’s pretty much the same thing,” he quipped.

Dube has travelled across North America and played top golf courses and has shared the links with pros and celebrities alike. He said actor Andy Garcia is his favourite person to play with. The Ocean’s 11 star once gave his jacket to Dube’s wife during a chilly round during one event. He said it’s a blessing to have some outstanding opportunities over the years.

“I had never dreamt of this, and I was playing with an 18, 19, or 20 handicap no one would want me out there. It never crossed my mind until I started taking the game seriously and got a chance to play with Mike,” he said.

Dube added that the benefits of his family’s philanthropy work was not expected or warranted. He said they simply want to make a better life in the community that has given them so much.

“We’re fortunate enough to have had some degree in success in business and in life so when we have the opportunity to help out we try to make it part of our mission as a company and people. We’re trying in our own way to make things a little bit better,” he said.

You can hear much more from Dube who spoke with Golf Saskatchewan’s Clark Stork earlier this week.