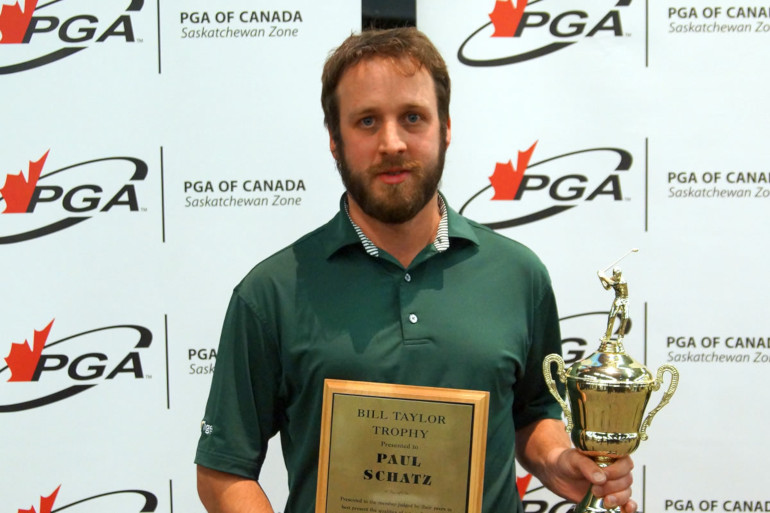 Schatz, 35, will take over the coveted position from Andrew Hnatiuk who resigned late in 2022.

Schatz spoke to Golf Saskatchewan about the position and how excited he and his family are for the new chapter. 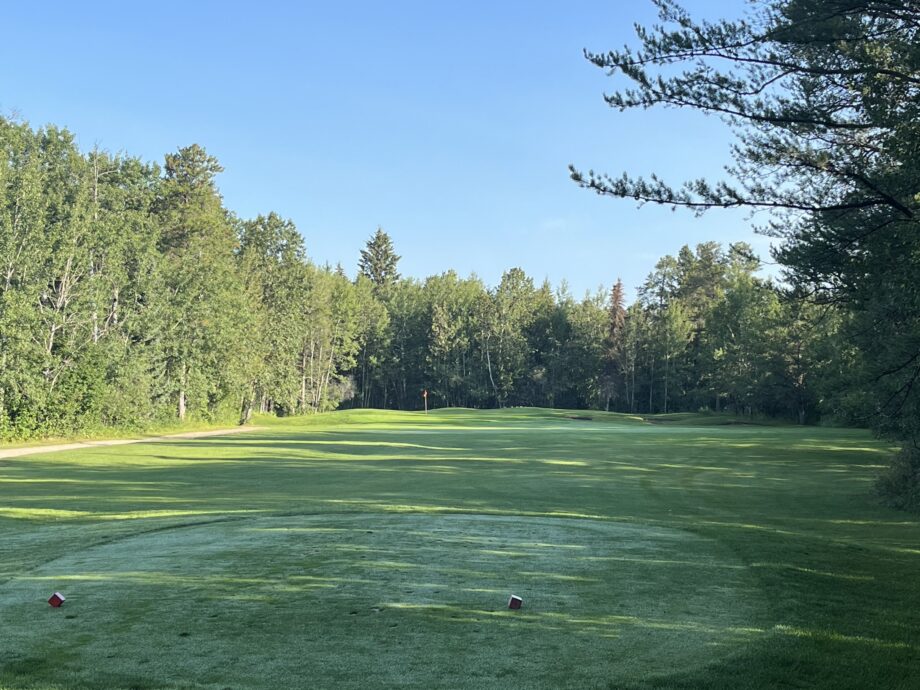 The Golf Canada NextGen Prairie Championship will be hosted by the Evergreen Golf Course in Nipawin this June.

Returning to Saskatchewan since Yorkton’s Deer Park Municipal Golf Course hosted the event that alternates between Saskatchewan and Manitoba each year. Last year the event attracted over 30 players from the province to Quarry Oaks in Stainbach, Man.

Golf Saskatchewan sat down with Evergreen Club President and Junior Golf Advocate Kevin Duchscherer and Manager of Sport Development Steve Ryde to discuss the long road to bring a Golf Canada event to the town and course as well as the momentum built off last year’s event that saw Alex Swinnerton win the boy’s championship. 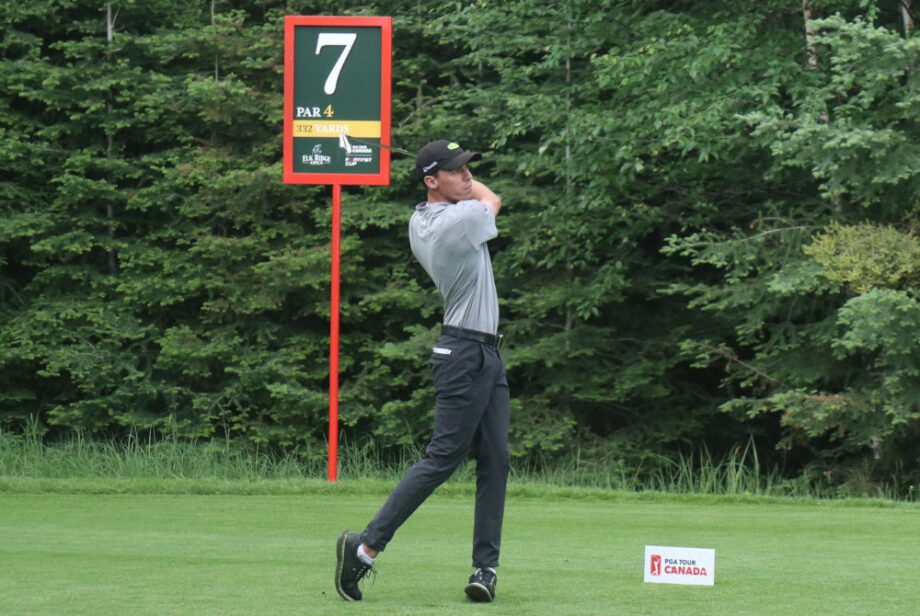 Johnson, 24, spoke to Golf Saskatchewan Tuesday and talked about the last year on the professional golf journey and sharing the experience Monday at Bear Creek Golf Club with long-time friend and college teammate Roman Timmerman.

Every year golf provides amazing moments and memories with Saskatchewan being no different.

Despite our somewhat short season the sport had it’s share of remarkable recognitions courtesy of the game. 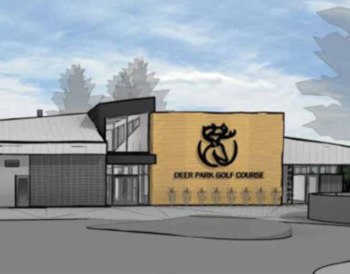 The city of Yorkton is committing $7.6 million to construct a new clubhouse for Deer Park Municipal Golf Course. 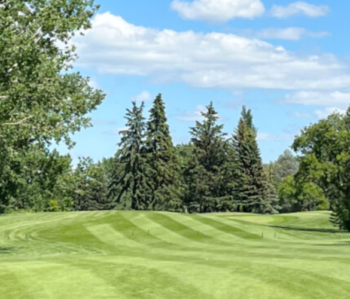 A jam-packed field of the province’s best amateur golfers will converge on Prince Albert’s Cooke Municipal Golf Course this week for the Saskatchewan Amateur Championships. 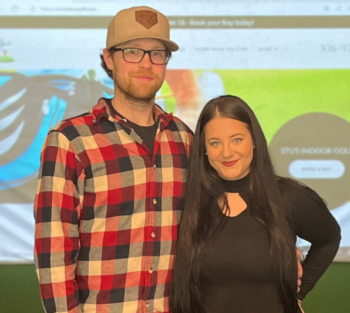 With a young family including three boys the Stupak family is hoping an indoor golf facility will grow golf and play a role in more recreational family-friendly options for Warman, Martensville, and the area. 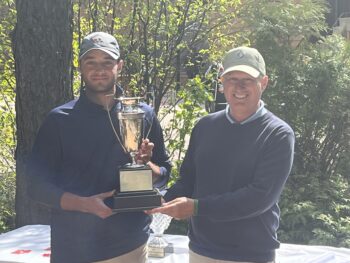 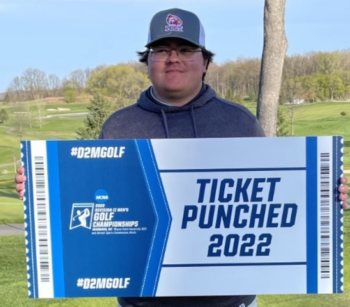 Estevan’s Jace Carlisle is headed to a collegiate national championship. 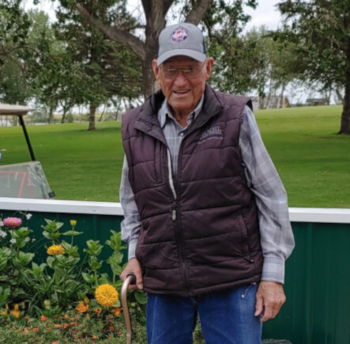 Shooting your age at 97, Mitchell still playing 18 holes per day

Elvin Mitchell didn’t start playing golf regularly until he was about 40 years old but now 97, he’s making up for lost time. 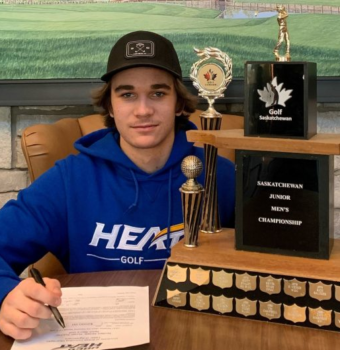 Regina’s Hunter Kutcher has decided to stay in Canada to play college golf and get an education. 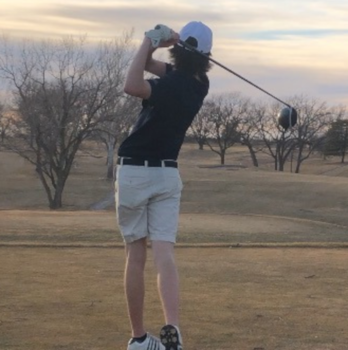 For Cole Jenkins, the thought of playing college sports has always been a dream but the Prince Albert product didn’t know what sport could lead him to his goal once high school was complete. 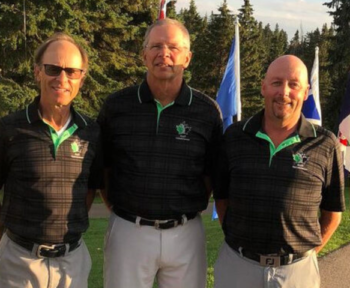 Much like the Canadian Senior Women’s Championship in Winnipeg, all reports back from Red Deer is the men’s event was also fantastic. 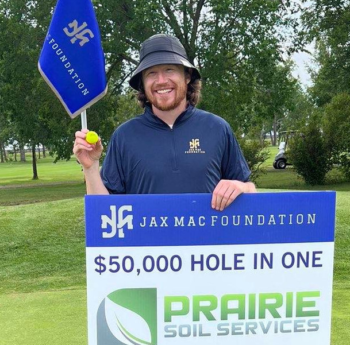 July 25, 2022 will stand out in the mind of Regina’s Mark Johnston for years to come.

Four Saskatchewan golfers were nominated in their respective categories for this years Saskatchewan Sport Awards, but none of the four were named provincial finalists.

Sask Sport announced all the finalists on Wednesday. To read more click here.

The 2022 Saskatchewan Sport Awards will be celebrated gala on Thursday, Jan. 26 at 7 p.m. at TCU Place in Saskatoon.

After returning to Saskatchewan last year, the Canadian Junior Golf Association (CJGA) will hold four events in the province in 2023.

“Deer Valley is a proud supporter of junior golf and we are excited to host juniors from across the province for the CJGA event this year,” Greenough said.

“We are extremely excited to bring the CJGA back to Saskatchewan for the 2023 season,” he said. “After the strong response to our event in 2022, we have decided to expand to four events in the province for the 2023 season. Continuing our relationship with Deer Park in Yorkton was vital, and we secured a new course in Deer Valley. We are ecstatic to continue to build junior golf in Saskatchewan in 2023 and beyond.”

All the events are part of the Saskatchewan Junior Order of Merit (OMT) Tours.

More information on the CJGA can be found on their website.

Beyond the Contour exceeding expectations 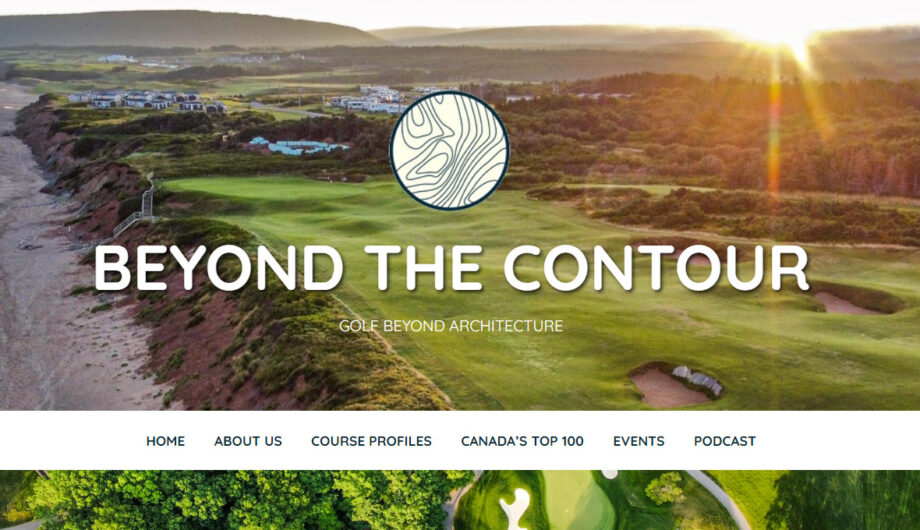 When 14-year-old Andrew Harvie decided to take his love of golf and create content for the internet he never dreamed a decade later he’s nearing a completion of playing all 100 of Canada’s top clubs.

Golf Saskatchewan caught up with Harvie, a participant in the 2018 Saskatchewan Amateur Men’s Championship at Dakota Dune Golf Links, to hear about the trip back to the prairies and his thoughts on the two iconic courses in Saskatchewan. 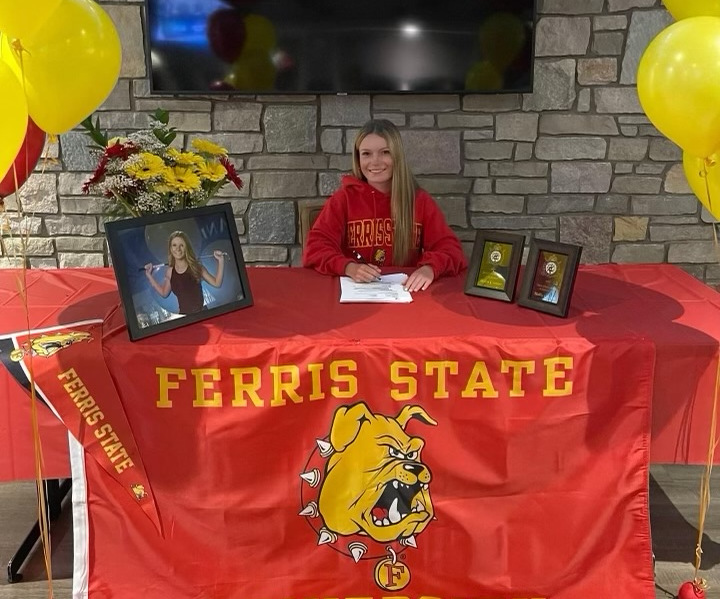 Regina’s Hallie Crozier has committed to college to continue her golf career and pursue a career in the industry.

Crozier, 18, is going to study Professional Golf Management while attending with a goal of working in the golf business. Crozier spoke with Golf Saskatchewan Clark Stork and discussed her decision to join the Bulldogs. 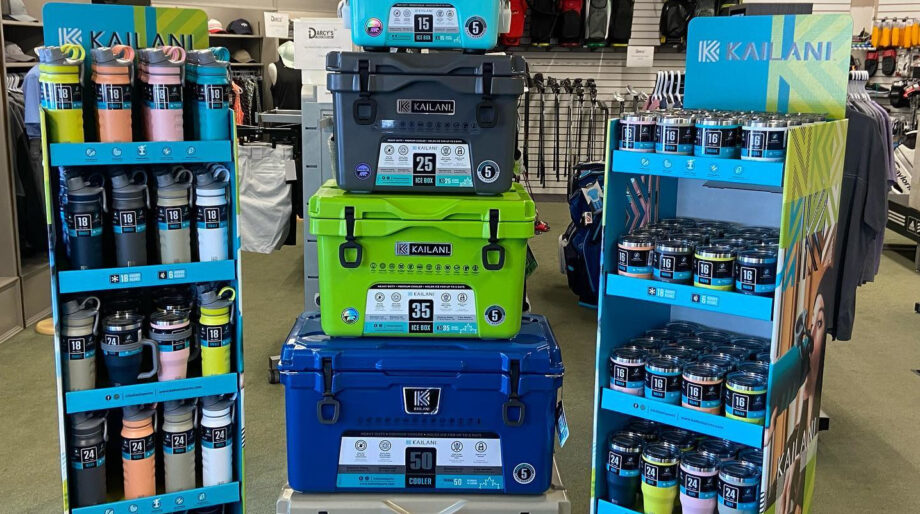 Despite being particularly new to the golf industry, Calgary based Kailani Sports is finding success within the sport.

Launching two and half years ago, President & CEO Sean Alexander took a chance on trying to wedge into the golf industry this past season.

Alexander spoke with Golf Saskatchewan at the 2022 PGA of Saskatchewan Buying Show to describe his company and how the expansion to golf, and the future.

Global Golf Plus opens in Estevan 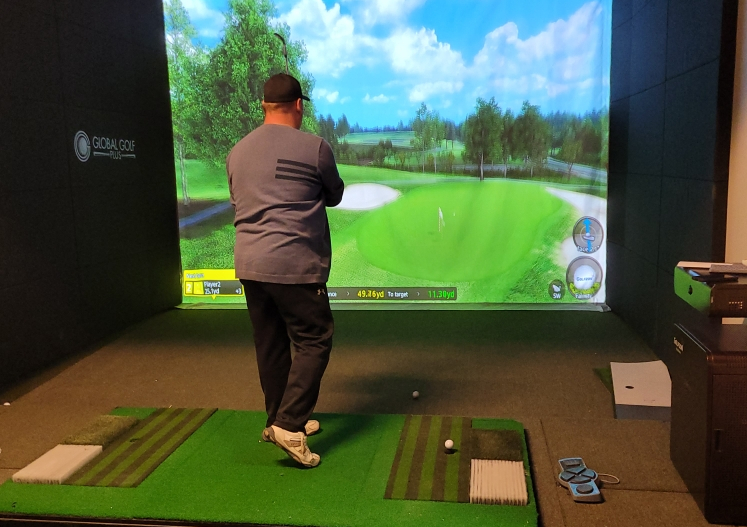 Global Golf Plus owner Rob Peloquin takes a shot at his facility in Estevan this week.
Clark Stork

Residents of Estevan and the surrounding area of southern Saskatchewan have a new indoor golf option.

Earlier this week Global Golf Plus had a soft opening in the city showing off their four GolfZon simulators, they also have two StrikeZon baseball simulators as well. Manager Sheldon Beatty told Golf Saskatchewan that the excitement in Estevan for indoor golf is evident.

“We had tonnes and tonnes of positive feedback,” he said. “Lots of people are saying when they walk into the place it gives off big city vibes.”

Owners Rob Peloquin and Pete Seregella travelled to a couple cnetres including Winnipeg and Red Deer before a final trip to Ontario settled the debate on what software and equipment to purchase. The ownership decided on GolfZon with Golf Vision Plus Plus technology.

“We have over 220 different courses available and they are adding more courses every week. A month ago there was only 180, now we’re over 200,” Beatty said.

Beatty said they are planning weekly ladies, junior, and men’s leagues for the new year and discussions have been in progress with TS&M Woodlawn Head Professional Amanda Minchin to host lessons and clinics in the city over the long winter months.

“We’ve been chatting with Amanda, she’s been in a couple times. We’re pretty sure she’s going to come in and do some junior lessons, and some private lessons,” he said.

Global Golf Plus is fully licensed with a pub-style menu ready to serve any size group. Beatty said with the soft opening and a buzz around the community more fun stuff is planned for after CHristmas.

“We’ll be doing other fun things, I can’t really say as of yet. We just want to get all these Christmas parties out of the way and the early bumps and bruises out of the way before we do that. When we do it, we want to do it right,” Beatty concluded.

To learn more about Global Golf Plus visit their website.

You can also hear more from Beatty in his interview with Golf Saskatchewan’s Clark Stork.