Catching up with KJ 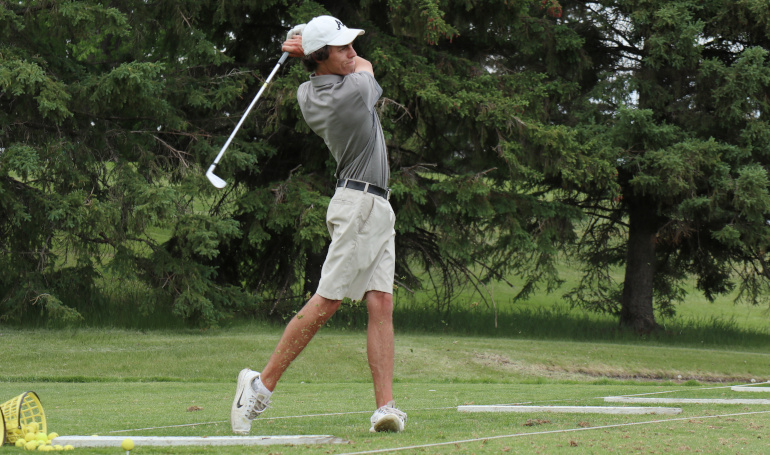 Kade Johnson practices on the range at Yorkton's Deer Park.

After a record-breaking year for the Southern Arkansas University golf team, Yorkton’s Kade Johnson is back home for the summer.

Golf Saskatchewan was able to catch up with the reigning amateur men’s champion ahead of the Future Links driven by Acura Prairie Championship last week.

The year that was

Johnson picked up his first career collegiate win earlier this year with the Muleriders golf team. Along the way the team, that includes Saskatoon’s Roman Timmerman set high marks all season long. Johnson said the year was memorable and included some big moments for the squad.

“It was awesome,” he said from the 10th tee at his home course of Deer Park. “We set quite a few records this year for the school, with strokes on holes and overall scoring. It was awesome to be a part of that and be in the record books. We got off to a hot start in the spring, the postseason didn’t really go the way we wanted with some injuries which is too bad, but I’m really happy with the year we had.”

Johnson played in nine tournaments over the season, his junior year earning the one victory, three top fives, and six top-10 finishes. He was also named to the Division II All-District First Team.

Timmerman was a large part of the golf team’s success as well. As a sophomore he also competed in nine events. Timmerman had four top-10 finishes including a second-place spot in the opening tournament of the year. He was a finalist for the male athlete of the year for the school as well. Johnson said sharing the last couple years with a fellow Saskatchewanian makes the success more special.

In the fall he will return for his final year, Timmerman has two seasons left.

Johnson has been back in Yorkton for about a month since the school year ended.

With a week off from any tournaments he had a chance to be around Deer Park practicing as well as volunteering for the Future Links Prairie Championship. He has competed in several junior tournaments at his home course as well as a Saskatchewan Men’s Amateur Championship in 2012 as a teenager. He said seeing the over 60 young golfers and their excitement brought back memories of his junior days.

“It’s awesome to see, it’s been a couple years since I’ve been able to play these events and it brings back a lot of good memories. It’s nice to see a lot of the Golf Saskatchewan crew again, it’s awesome. 63 is a good number, it’s awesome to see all these kids out here,” he said during their practice round on June 13.

Johnson has a provincial junior championship under his belt in 2016 and several other junior golf titles. He had some advice for young golfers competing in events across Saskatchewan and Western Canada.

Johnson has had a chance to watch the progression of Ella Kozak, a 13-year-olf golfer from Yorkton. Kozak participated in both the national junior girl’s and amateur women’s championships last year plus numerous Maple Leaf Junior Tour and Future Links events. Johnson provided some advice to her as well.

“To play your best golf you can’t be golfing all the time,” he explained. “You need to do other things, mix it up in life, that would be my biggest thing. She has all the talent in the world, golf swing is great, hits the ball great, short game is good, you just need to stick with it but not too much. In other sports you have to be good when you are young, in golf you don’t. It helps but do other things, it’s not all about golf and in my opinion it will help you play better.”

Johnson bypassed the Lobstick in Waskesiu this past week to practice what he is preaching taking time off following the Scotia Wealth Management Open in Nipawin where he tied for sixth place. He will now travel to Calgary and compete in the Glencoe Invitational from June 20 to 22. Following that he will enter the US Amateur qualifier in Fargo, N.D. before coming back to Saskatchewan and prepare for defending the amateur championship. Johnson said he’s looking forward to playing the Saskatoon Golf and Country Club in July.

“It’s in really good shape. I’ve been learning more about it since it’s been announced,” he explained. “I don’t know much about it but I’m excited to get up to the Reliance Gregg’s Central Amateur and look at it for the first time and play.”

A year after his dissection of the Dakota Dunes Golf Links Johnson said the amateur win is still special.

“I knew I was proud of it and everything but after you go home and look at the names on that trophy it’s awesome,” he beamed. “My coach, Brad Birnie is on it twice, Dave Stewart, his dad, Ron Stewart, Colin Coben, you learn history about names even before that. Obviously Graham DeLaet is on it, I’m so proud to win it, it’s a big accomplishment for sure, I was happy to get it done.”

Johnson will look to become the first back-to-back winners since 2009 – 2010 when Scott Thompson accomplished the feat. He said that is the goal going into the summer.

“It’s another great field, another good golf course, I’m definitely working towards it. That’s one of the biggest goals of the summer to try and defend it. If I have a good week I will have a chance to get it done,” he added.

Johnson will head back to the Southern United States in August and complete his final year of college.

The decision then needs to be made about what’s next for the talented player. He said his options are open and he’s looking forward to the challenge of potentially earning a professional career.

“I’m going to give it try and if it doesn’t work it doesn’t work,” he admitted. “I definitely want to give it a shot, I don’t really know at this point what my best route would be. Maybe the Mackenzie Tour and Q-school at the beginning of the year, that’s a possibility. Maybe some Mini-Tour events in Arizona, I am not exactly sure what my plan is lying ahead but I guess we will see when the time comes,” Johnson laughed.

You can hear the complete interview with Johnson who spoke with Golf Saskatchewan’s Clark Stork.