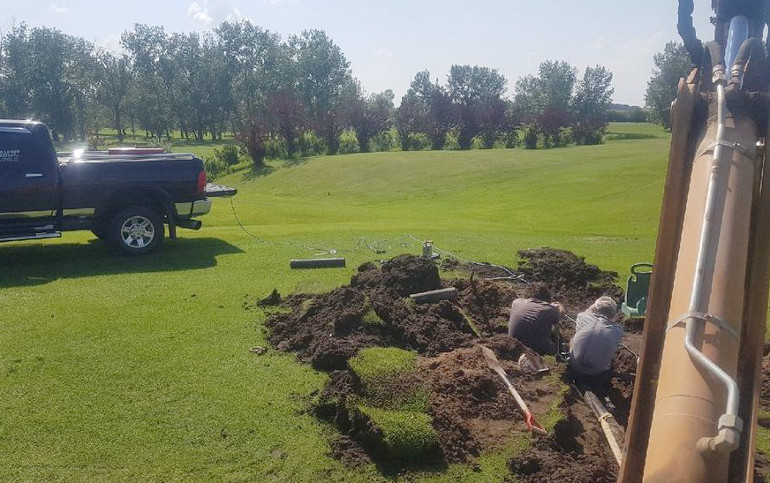 The Carnduff Golf Club (CGC) is planning on an irrigation upgrading project worth approximately half a million dollars.

The nine-hole course’s current watering system dates back to the late 1980’s and is a “mess” according to Kris Carley. Karley is a member of the town’s council and sits on the golf club board as a member of the local civic government. He said the current annual maintenance costs are out of control.

“We’re spending anywhere from $10,000-$20,000 each year minimum on the system,” he told Golf Saskatchewan. “That’s not even manpower, that’s just parts and pieces.”

A couple weeks ago 16 sprinkler heads were leaking, Carley said each replacement is $500. To add to the $8,000 bill to replace the heads, the new ones don’t fit properly forcing holes to be dug to make proper adjustments allowing the system work.

The course has a deep well system but due to lack of rain over the past two years the water supply is scarce, that applies to a nearby creek as well. Carly said fuel costs are skyrocketing adding to the operating costs of trying to keep the course green.

“We’re running pumps that cost $50-$60 a day just to fill our reservoir to actually water out of. We’ve shut down our fairways, we’re only watering the tees and greens,” he said.

At a recent CGC board meeting the voting members approved a decision to spend upwards of $500,000 to fix the irrigation system. Carley said a local man donated over $100,000 to the club posthumous, they allotted $100,000 towards the project from that gift. The Carley family of companies also donated $50,000 towards the goal. Carley said the club has sent out request for proposals for the potential job that has a trio of options. One of the choices could be working with the town on a green project involving their lagoon system. The lagoon is receiving an $8.5 million upgrade, using wastewater to hydrate the course is possible. Carley said that option could potentially lead to more funding. He’s applied for a grant through the town for $50,000. The last two years the rink has being awarded money through the “facility’s grant.” Refurbishing the deep well is another costly option. Despite the dry conditions and ongoing water woes, Carley said the club had a positive year.

“We were able to raise memberships this year. We lowered member prices and got more members in so we’re hoping to make a profit this year. We could potentially roll that over into the project as well,” he said.

The irrigation upgrade will almost double the course’s sprinkler head count from 160 to 300. One new tee box will be constructed during the renovations, another tee box will be added on a hole and a new green will be built. Carley said they could potentially expand a handful of holes, the blueprints will include those options and direction.

The course is working on future fundraising initiatives to raise the rest of the money. He said the club has little debt so borrowing a portion of the needed funds is a possibility. The club would like to have the upgrades completed by 2020.

Carley put a plea out on the Carnduff course’s Facebook page seeking assistance with an application into the Kraft Heinz Project Play contest featuring a $250,000 grand prize.