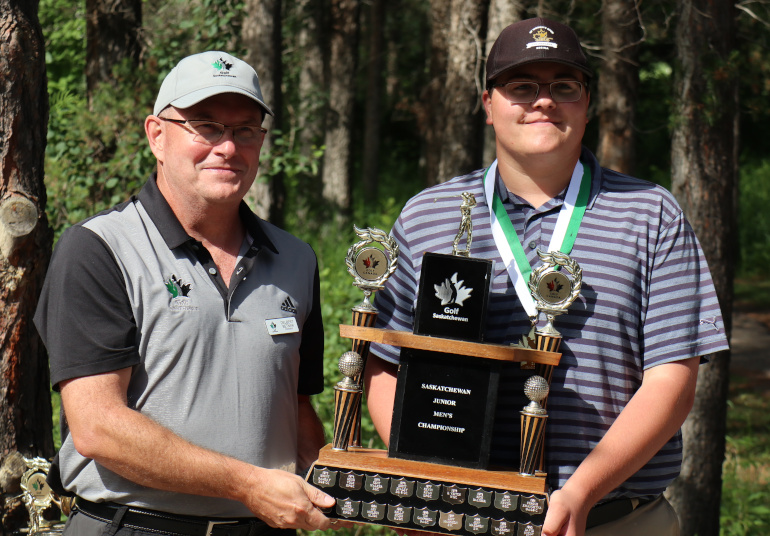 Jace Carlisle is one of two Graham DeLaet Scholarship awardees.

Carlisle, 17, was the start to finish leader of the 54-hole event that started on July 9. He fired a sparkling 69 on day one before the leaders struggled during round two. The TS&M Woodlawn Golf Club member’s second round of 82 kept him one stroke ahead of the field. He rebounded nicely on day three stroking a two-under, 70 to win the event by six shots. Carlisle said he reached out for help prior to the final round and now he’s a provincial champion.

“I phoned my coach, Kevin Dietz and we talked, he said just forget about it, that’s what I did,” he said after the win. “I just forgot about it, went to the range and got my swing back. It worked today. Yesterday I was feeling the nerves a little bit. I was being a little steep, I figured that out, I was feeling better with the swing today and the putter.”

Carlisle’s third round was steady all day, a birdie on the par five, first hole got his confidence back helping him earn his first provincial event. He posted five birdies during the round to go along with a couple bogeys, the rest he parred. He said going into the day with a one-shot lead, the tournament was open for the taking by several players.

“It was jam packed at the top, it was anybody’s tournament at the start of the day. I came out and made the birdie that got me going, I made a nice putt. I had a hiccup on two, but it didn’t really set in until I was on the 18th fairway and I knew I had it,” Carlisle said.

He will now lead Team Saskatchewan into the Canadian Junior Boy’s Championship in Hartland, New Brunswick in August. Carlisle said he’s excited to finally get a chance to represent Saskatchewan on the national stage.

“I’ve never played a Canadian national tournament before, I am looking forward to getting out to New Brunswick,” he beamed. “I have never been out east, it should be fun. I wanted to win this so bad, I’ve worked so hard I wanted to win so bad.”

Joining Carlisle on Team Saskatchewan will be Saskatoon’s Steven Duchsher and Kindersley’s Cort Tunall who finished second and third respectively. Saskatchewan is allowed one alternate, that will be Brody Istace, also of Kindersley.

Unlike Carlisle, Autumn Neiszner had to fight back from a first-round deficit to win her first provincial championship.

The 15-year-old Wascana Country Club member was three shots behind reigning champion Brooklin Fry after the first round, but she strung together her best three career rounds of golf to become the 2019 winner. Neiszner said the victory is special.

“It feels really great,” she said. “I played some really good golf. To shoot my three best rounds ever in a tournament all in a row feels good. There was a competition, everyone played well, it definitely feels good.”

Neiszner was the only junior woman in the event to shoot in the 70’s every round, with her 54-hole score of 230 (78, 76, 76) she won by nine strokes over Lauren Fox of Creighton. Neiszner had already qualified for a spot at the Canadian Junior Girl’s Championship with her showing at the Future Links Prairie Championship in Yorkton. Coming into the provincial event she was hoping to perform well without the pressure.

“Winning wasn’t my goal, playing my best golf I could was and obviously I did, and I ended up winning which is great,” she said.

The majority of the junior women’s field participated in last week’s Amateur Women’s Championship in Saskatoon. Neiszner was nursing a little bit of an injury and skipped the event. She said that potentially helped her be fresher coming into Nipawin.

“I think just taking a break and practicing for a week was really helpful,” she said. “I just kept the ball in play, I hit greens, I putted well, I didn’t make any really big mistakes.”

Joining Neiszner at nationals in Lethbridge will be Fox, Fry, and Ella Kozak who edged Sarah Grieve in a six-hole playoff to decide the alternate member of Team Saskatchewan.