Carlisle goes back to back at high school championships 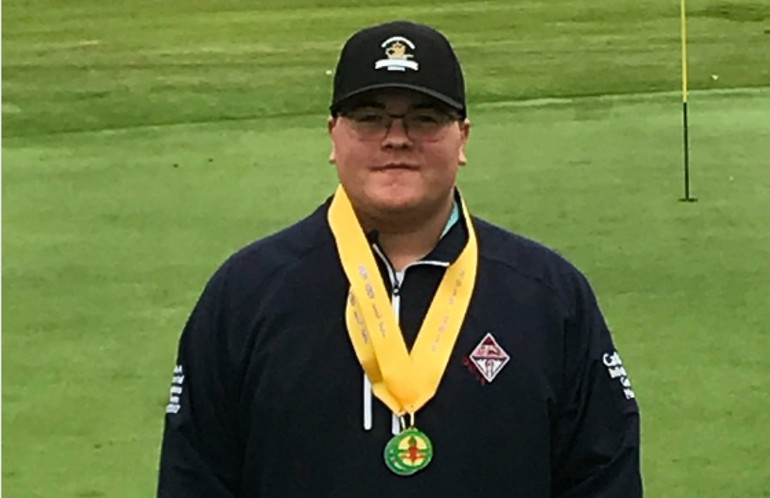 The Estevan Comprehensive School (ECS) grade 12 student shot rounds of 79 and 75 on Sept. 21 and 22 to claim his second straight title by just one stroke over ECS classmate Chase Gedak. Carlisle, 17, said winning the high school championship again was an important goal of his.

“Obviously I wanted win again, I would have liked to get the two gold medals out of it with the team division, but we had a little bit of a different squad this year. I’m just glad I defended my title. I’m pretty sure I’m the only ECS kid to win back-to-back provincial titles so it feels great,” Carlisle told Golf Saskatchewan.

In the team competition at the event hosted by the North Battleford Golf Club Prince Albert Carlton won the tournament with a total of 463, just two strokes ahead of ECS.

The 36-hole championship was challenged by a September snow storm in the region during round one. Carlisle said he used the snowy conditions to his advantage.

“I had lots of fun playing in that weather, it was the first time I have ever played conditions like that. I was soaking it all in and enjoying every minute of it. Obviously, it helped me play well and get to the top by the end of it,” he said.

Carlisle said the snow fell ahead of day one of the event. While on the 16th tee during the opening round he explained the sky was clear for their tee shots but by the time his group reached the green their balls were almost unfindable. On hole 17 he searched for his ball for several minutes before finding it near the green, where he thought he shot it. He said by the 18th tee box something had to be done.

Carlisle, who recalls taking up the game at the age of three has worked at the TS&M Woodlawn in Estevan for six years was busy on the Order of Merit (OMT) Tour as well as the Maple Leaf Junior Tour (MJT) this summer. He played four OMT sanctioned events earning 500 points. Carlisle said he was satisfied with his summer but wanted to place higher than 23rd in the OMT rankings.

“It wasn’t what I wanted out of the year, I struggled with some confidence early in the year,” he said. “I played alright at the provincials until the last round. I couldn’t put three rounds together this year to put me in a good spot. I played okay this year but not up to my expectations.”

Carlisle will graduate in June from ECS and hopes to pursue a golf scholarship in the United States.

You can see the complete results from the high school results here.