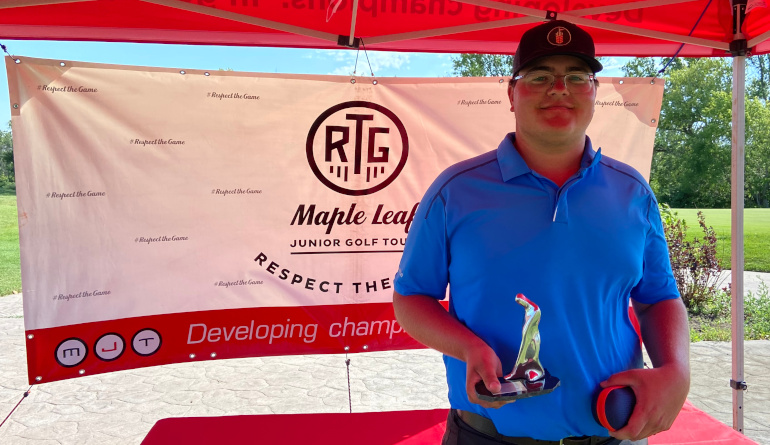 Jace Carlisle has wrapped up his jr. career with a win. Photo-Jeff Chambers

Estevan’s Jace Carlisle will remember his last competitive round of junior golf. Wrapping up his under-19 career on his home course, the TS&M Woodlawn, Carlisle came out on top of a three-player playoff to win the Maple Leaf Junior Golf Tour Re/Max Blue Chip Realty Classic on Friday.

Tommy Danielson of Saskatoon placed second two shots back at 145 (72, 73) and Alex Swinnerton, also of the Bridge City placed third at 149 (73, 76). Regina’s Will Blake placed fourth with a two-day score of 150 after a solid opening round score of 69.

Max Regier (above) is back on top of the bantam boy’s division after shooting rounds of 73 and 69 for a two-day total of 142, seven shots better than Weyburn’s Darien Herlick. Dane Giesbrecht placed third with a score of 152 (75, 77). The trio has been competing hard against each other all season long each tasting success on the MJT circuit or provincials in Swift Current.

Sarah Grieve (above) continued her dominance of the 15 – 19 girls’ division winning for the third time in as many events the 17-year-old Saskatoon golfer entered.

Next up on the MJT schedule in Saskatchewan is the OOM Championship at The Legends Golf Course in Warman on Aug. 22 and 23.

The MJT Mini-Tour was in action on Thursday, Aug. 6 in Estevan which included the tour’s first playoff hole. The MJT has all the details here.

The Mini-Tour will also stop in Warman on Aug. 23.