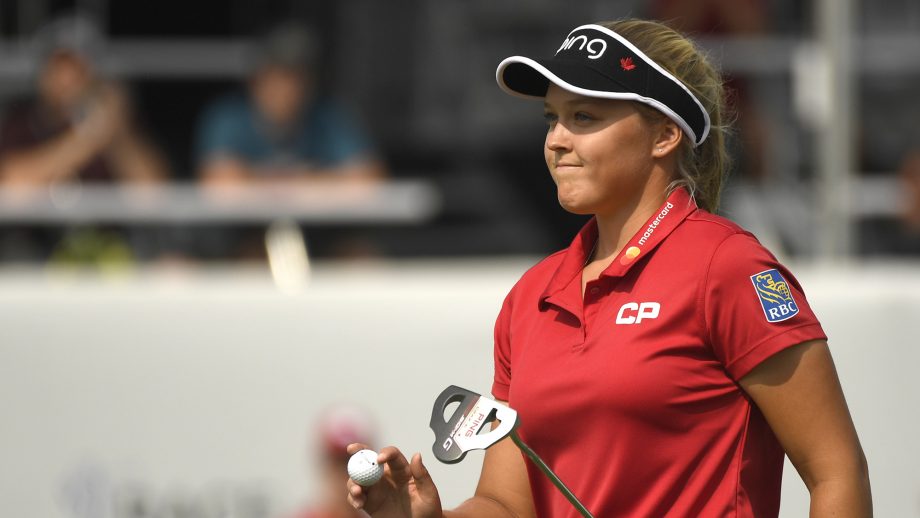 REGINA – Sung Hyun Park emerged from the scorer’s tent after a masterful round of 64 at the CP Women’s Open to a swarm of golf fans.

Few seemed to notice the defending champion and world’s best women’s golfer as she strolled undisturbed down the path, fresh from tying a course record at the Wascana Country Club.

This crowd had only one person on its mind. Canadian star Brooke Henderson is the star of this show, especially after a second straight 66 left her just one stroke behind clubhouse leader Amy Yang of South Korea.

“Brooke is almost like Canada’s Tiger Woods,” said Park, who played with Henderson and Sweden’s Anna Nordqvist. “I was really surprised at how many fans came out to support Brooke today. To witness that was pretty awesome.”

Dozens of fans – many clad in red and white and waving small Canadian flags – let out a roar when Henderson chipped in on her opening hole and they were just as vocal when she capped her round with another birdie.

.@BrookeHendersonGolf shoots a second-round 66 to sit in the clubhouse with a share of 2nd place, one off the lead #CPWO

The 20-year-old from Smiths Falls, Ont., was at 12-under-par 132 and right in the mix for what could be a very exciting weekend.

“I hit the ball in good spots and made birdie putts when I had them,” Henderson said. “I feel like I made the most of today’s round, which is always a great feeling.

“To be close to the top of the leaderboard heading into the weekend is awesome, especially when you’re here in Canada.”

Henderson has managed to score in different ways over the first two rounds. She took advantage of her impressive length on Thursday and had her short game working when the wind picked up Friday.

Yang shot a 65 to move into top spot at 13-under-par 131. American Angel Yin (67) joined Henderson in second place with several groups still on the course.

“I was hitting it pretty solid out there,” Yang said. “But I gave myself a lot of good chances and I think I made most of them out there.”

Park, from South Korea, was three shots off the lead after her 64, a score that three players attained a day earlier. She was joined at 10 under by first-round co-leader Nasa Hataoka of Japan (70) and Maria Torres of Puerto Rico (66).

Starting on the par-4 10th hole, Henderson had four birdies over her first six holes before missing a three-foot putt on the 16th for a bogey.

She started to spray the ball a little bit after that miscue, but the six-time winner on the LPGA Tour had some luck on her side too.

Her drive sailed well right on the 18th hole, hitting a grandstand post on a bounce before settling in the rough. Henderson found the green with her next shot and two-putted for par.

Five pars followed after the turn before Henderson found a late groove. She hit a tricky four-foot downhill putt on the sixth hole and drained a 22-footer from the fringe for another birdie on the seventh.

“Definitely have a lot of confidence in (my putter) this week, which is always amazing when you can depend on that club,” she said. “But I think overall, everything is kind of going really well.”

The 20-year-old from Smiths Falls, Ont., closed her round by going up-and-down from the side of the ninth green for birdie to the delight of the partisan gallery.

It was hot and sunny again on the 6,675-yard course and the wind really started howling later in the day. First-round co-leaders Ariya Jutanugarn of Thailand and Colombia’s Mariajo Uribe had late tee times.

Anne-Catherine Tanguay of Quebec City (71), one of 16 Canadians in the field, was a good bet to make the cut at 3-under 141. The early projected cut line was 2 under.

Play continues through Sunday at the US$2.25-million event.