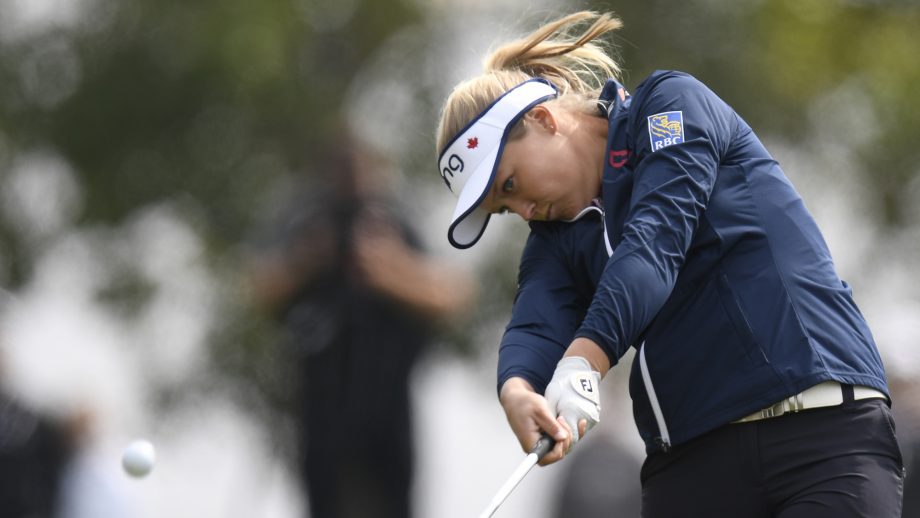 REGINA – Canada’s Brooke Henderson feels most comfortable with her game when she’s on top of the leaderboard.

A solid third round has left her in that very position as she prepares to take a run at history at the CP Women’s Open.

“It’s a lot more fun (on top) and I feel like I can kind of go off the crowd a little bit more,” Henderson said. “It’s just really exciting and I feel like when I have a lot of confidence in my game, that’s when I tend to make a lot of birdies and I tend to play really well.”

After back-to-back scores of 66, Henderson had to deal with windier conditions at the Wascana Country Club.

Her length off the tee was impressive but her short game was inconsistent at times. Henderson did manage to hit some big putts when she needed to and spent most of the afternoon alone in first place.

@brookehendersongolf shoots a 2-under 70 to lead heading into the final round at the #CPWO ??

On Sunday, she’ll try to become the first Canadian since Jocelyne Bourassa to win this tournament. Bourassa was victorious in 1973 in Montreal.

Yin missed an eight-foot birdie putt on her final hole that would have given her a share of the lead. Defending champion and world No. 1 Sung Hyun Park of South Korea (70) was two shots back.

Australia’s Su Oh (69) and American Austin Ernst (70) were three strokes off the lead.

The 6,675-yard course sets up well for Henderson’s style. She’s one of the LPGA Tour’s longest hitters and is not afraid to go for it.

If Henderson can attack the par-5 holes and stay consistent on the greens, she’s got a great shot of winning the event.

“I definitely do play better when I’m aggressive,” she said. “I play smart but aggressive and when I’m kind of chasing birdies, I feel like that’s kind of where I’m playing my best. But it just kind of depends on the conditions.”

Play will begin earlier than usual in an attempt to avoid the wet weather that’s expected to arrive by lunch hour. The fourth round will start at 7 a.m. local time and the last group will tee off at 9:01 a.m.

Henderson, from Smiths Falls, Ont., started the day one shot behind second-round leader Amy Yang, but the South Korean bogeyed her first two holes to give the Canadian the outright lead.

They were joined in a group with Yin, who hovered near the top of the leaderboard for most of the day.

With a vocal group of supporters cheering her at every turn, Henderson opened with four straight pars before a drive on the par-4 fifth hole found the rough and led to a bogey. She responded by rolling in a 12-foot birdie putt on the sixth.

She was aggressive after the turn with birdies on Nos. 12 and 13. Henderson nearly eagled the 14th hole, but her chip from the rough hit the back of the cup and bounced out for a tap-in birdie.

She ran into some trouble on the 16th hole but recovered nicely. Henderson pulled her drive and her second shot landed in the rough beside a greenside bunker.

Standing in the sand, she flopped a wedge that came up short but she hit a 20-footer to save par.

“To be able to get up and down when I kind of ran into a little bit of trouble there on 16 I think was really key and just (helped me) keep my composure a little bit,” Henderson said.

Henderson and Yin both struggled on the 17th green. Yin had an eagle putt but settled for par while Henderson missed a four-foot par putt.

Hamilton’s Alena Sharp (70) and Anne-Catherine Tanguay (70) of Quebec City were nine shots off the lead.

Henderson, 20, has one victory this season and six wins over her LPGA Tour career. Her best career finish at this event came last year in Ottawa when she tied for 12th.

“She’s gritty and determined and aggressive,” Sharp said. “I think that is a huge thing to have out here, especially with the wind.”