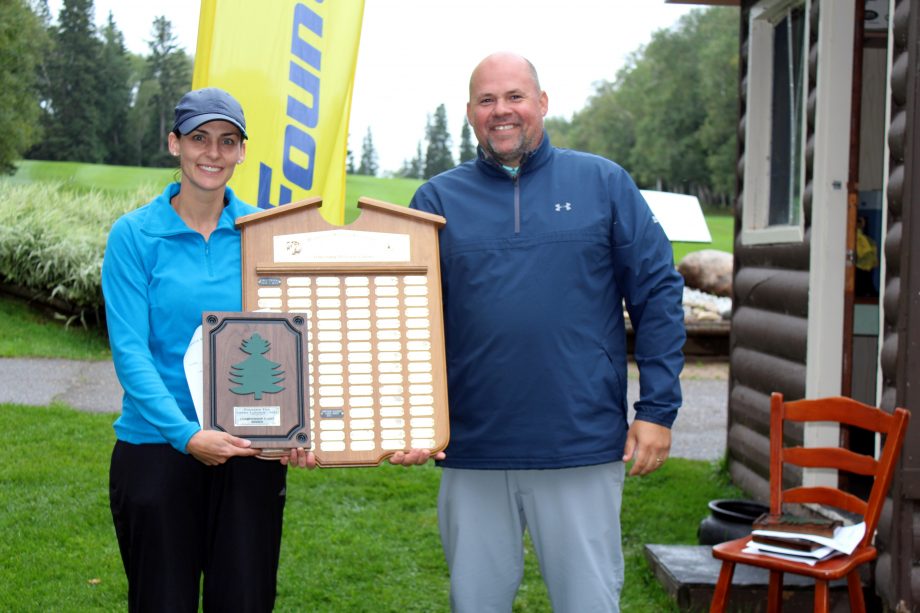 After missing out on last year’s championship flight final, Kim Brown regained her spot as the top golfer at the Fountain Tire Ladies Lobstick tournament at the Waskesiu Golf Course.

Brown, who grew up in Prince Albert and now calls Saskatoon home, captured her fifth title in the last seven years on Friday as she defeated three-time champion Kathy Ziglo of Saskatoon.

“It’s always a nice feeling to be able to take this trophy home,” said Brown, who previously won the tournament in 2015, 2017, 2018 and 2019. “The Lobstick tournament is always a great week and I really love being up here at Waskesiu.”

After earning the top seed in the championship flight by defeating Moose Jaw’s Lorie Boyle and Shell Lake’s Brooklin Fry in a playoff on Tuesday, Brown continued her strong play in the match play portion of the tournament as she earned victories over Saskatoon’s Dana Kidd and Dianne Bethune.

“I felt like the playoff was sort of where I got into my groove, which I stayed in for the next couple of days,” Brown said. “That really got me into the mind frame that you need to do well in the tournament.”

Brown had built up a four-hole advantage after just six holes in Friday’s final, but had to hold off a hard-charging Ziglo on the back-nine.

Her lead was cut down to one after Ziglo made a par on the par-four 15th, but Brown was able to seal the deal by getting her approach shot on the par-four 17th to just a few feet from the hole, which Ziglo would later concede.

“It was nice to get that cushion early on, but I know that Kathy is going to bring her very best in a final and I couldn’t take anything for granted,” said Brown, who faced Ziglo in the 2015, 2018 and 2019 championship flight title contests.

“I just tried to stay steady for the rest of the day. I had a few hiccups there in the middle but I was able to pull it together and made a good tee shot on (the par-three) 16 and I was able to carry that over to 17.”

“I started off a little slow and you never want to give Kim a bit of a head start as she doesn’t make a lot of mistakes,” Ziglo added. “I just started grinding away there as the match went on and I tried to win one hole at a time.

“I missed an uphill birdie putt on 11 that would have allowed me to put some pressure on her and I also missed a putt on 13, but once she made that great approach shot on 17, I knew it was pretty much over.”

While Ziglo was unable to repeat as Lobstick champion, she was just pleased to be back at Waskesiu after surviving a battle with COVID-19 that had her in the ICU last December.

“Flip, I might not have even been alive for this,” Ziglo said.

“I wasn’t able to play three days in a row this year and I was worried that I wouldn’t make it through the tournament as I was starting to have trouble breathing and I was losing my strength. Thankfully, it all turned out okay.

Ziglo, who previously won the tournament in 2012 and 2014 before her triumph last summer, defeated Fry in a rematch of the 2020 final and followed that up with a semifinal win over 2016 champion Abra Thompson of Saskatoon.

“I think Brooklin is someone that I’ll always have to make sure that I’ll have to play hard against for the rest of my life,” Ziglo said. “She’s a great kid and a great golfer.

“Neither Abra or I played great in the semifinal, but I was able to do what I needed to do in order to stay ahead of her during our match.”

The rest of the results from Friday’s finals are as follows: