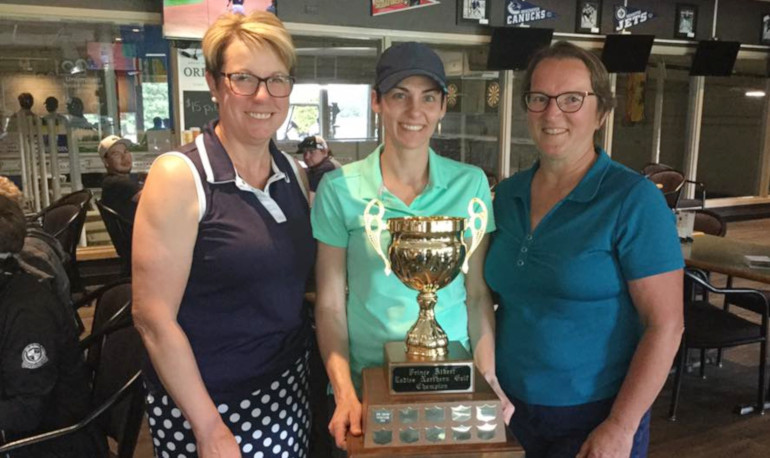 Saskatchewan’s reigning Women’s Order of Merit Tour (OMT) champion has kicked off her 2019 with a victory.

Saskatoon’s Kim Brown cruised to a seven-stroke victory on Sunday in the Ladies Northern at the Cooke Municipal Golf Course. Brown fired two consistent rounds of 76 and 78 to outlast Pauline McDougall and Sherry Anderson. Brown said opening the campaign with a victory is a great way to start the season.

“The Northern is always my first tournament of the year so you never know how it’s going to go when you haven’t been playing a lot, but everybody is in the same boat, shaking off the rust,” Brown told Golf Saskatchewan. “It felt good, it was good to have good weather on a great golf course, it was really nice.”

Brown admitted she got off to a rough start on day one but fired one under par on the back nine during round one to set herself up for a chance to win her first Ladies Northern. A solid start to round two opened a wide lead before she stumbled with a triple-bogey on hole 14 set her back. She said she rebounded nicely and finished strong on route to the win.

“I faltered a little bit coming in,” she laughed. “I had enough of a lead, and I hung in for the next few holes and I ended up birdying 18, so I finished strong. That happens, you have your ups and downs and I guess at the end of the day it was enough to get it done.”

McDougall, a ten-time Cooke women’s champion shot 77 on day one and 84 during round two. Anderson (right) ended up as the senior champion carding rounds of 79 and 83. Abra Thompson and Ann Kirkland tied for fourth at plus-18.

Every June 4, Women’s Golf Day is celebrated by players, courses, and facilities around the world. Saskatchewan and Canada are true to form working tirelessly to promote the game across all genders.

Brown has been involved with golf almost her entire life going back to being on the course with a best friend. As she grew and continued to play and become an excellent athlete, so did her list of friends and colleagues. Brown said that’s what makes the game special to her.

“You have so many good friends that come back year after year. The course and tournaments are a place you get to see your friends,” she said. “Obviously you enjoy spending time with them, the bonus is we’re doing something we love to do. We get to be outside, play golf, and do our best.”

A prime example of the comradery and supportive mentality of the women’s game was on full display in Prince Albert this past weekend. Both McDougall and Anderson shaved their heads in support of Carole Rucks, who is a cancer warrior. Rucks was in the field of the Ladies Northern. A fundraising event involving the head shaving was held at the Rock and Iron Sports Bar at the PA Golf and Curling Centre. Brown was among the attendees and said the event spoke volumes for women’s golf and sports in general.

“I think that really summed it up,” she said. “I said at the course on Sunday when I addressed the players that were there, I said this is why we’re here. We’re here to support each other, remember each other, and have each other’s backs. What Sherry and Pauline did is a real testament for what we can do for events and supporting each other.”

The “Cuts for Carole” campaign resulted in approximately $13,000 in funds raised that will be directed to the Victoria Hospital Foundation and the chemotherapy room.

Junior girl’s golf is also something near and dear to Brown’s heart. She mentioned how a good friend of hers was a young golfer, so she got into the game to spend time with her. Eventually the skill set developed and Brown found ways to play along boys in events or other supportive avenues at her golf club. She said now the leaders of courses and coaches need to branch out, think outside the box and find creative ways to not only elevate competitive female junior golfers but positive recreational opportunities as well.

“There is going to be very competitive girls and it’s going to be about that, but there is going to other girls where it’s about having their friends and having a social circle around them. We have to find ways to offer those things that are going to keep that one girl,” Brown said.

Golf Saskatchewan has several programs in place for women’s programming. Ada Mackenzie Day is a 10-day long event that raises funds for junior golf development. You can fill out a form prior to playing a round at a member club, contribute two dollars and be entered to win prizes.

Upwards of a dozen courses offer Canada Day events over a stretch of days at the end of June and into early July. Again, two dollars can get players involved in across any handicap bracket.

Golf Fore the Cure events have also teed off in Saskatchewan with many more to come. Money raised during these one-day events goes back into battling cancer and raising awareness against the disease. Last year Elk Ridge’s event brought in well over $20,000. Their tournament will be held on July 11.

The province has had several women golfers accomplish amazing feats on the course, and off it.

The Saskatchewan Golf Hall of Fame has 11 women inductees led by the late, great Joanne Goulet. You can see all their accomplishments here.

Currently the Saskatchewan woman making the most noise on the course is Saskatoon’s Anna Young. The five-time women’s amateur champion is playing Mini Tour events and chasing her LPGA Tour card. She recently competed in the CP Women’s Open last year in Regina at the Wascana Country Club, making her LPGA debut. She has two professional tournament victories.