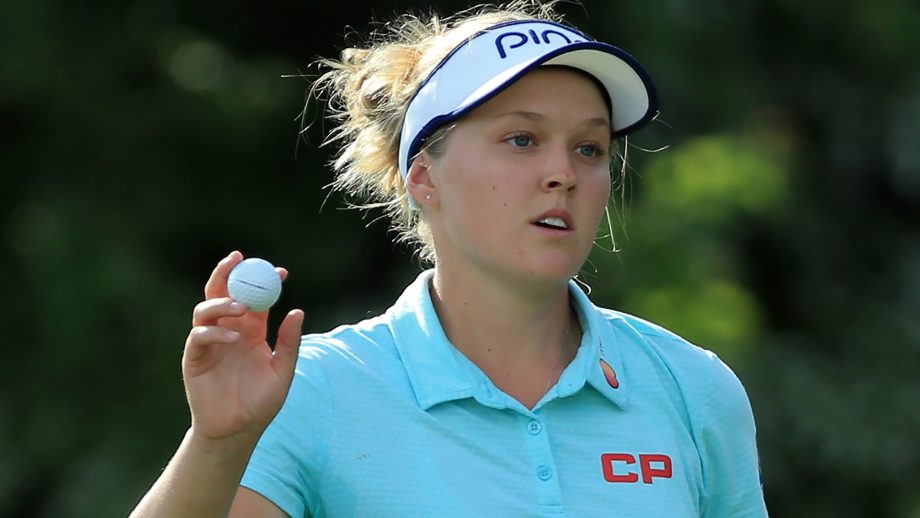 WILLIAMSBURG, VA - MAY 20: Brooke M. Henderson of Canada waves to the crowd after putting out on the 18th hole during the third and final round of the Kingsmill Championship presented by Geico on the River Course at Kingsmill Resort on May 20, 2018 in Williamsburg, Virginia. The tournament was shortened to three rounds due to inclement weather during round two. (Photo by Hunter Martin/Getty Images)

WILLIAMSBURG, Va. – Brooke Henderson made a late run at the Kingsmill Championship on Sunday, missing out on a three-person playoff by one stroke . The Smiths Falls, Ont., native finished the rain-shortened event at 13 under par to collect a fourth place finish.

“I just had a lot of great energy today. I started off with three birdies right off the start. Felt like I could really go low today, which is a great feeling,” said Henderson. “I came up a little bit short this week, but just to be in the hunt again and to feel that kind of adrenaline and to see my name at the top of leaderboard, it’s always a lot of fun.”

Henderson made it interesting down the stretch with three consecutive birdies in her last four holes, making a charge at the leaders.

“Yeah, it was pretty awesome. I just felt like — I was in the groove, and I felt like I could make birdies and I could make a charge, so I’m really happy I was able to do that,” added Henderson.

Ariya Jutanugarn arrived at Kingsmill Championship with no expectations, and it was a strategy that paid off handsomely.

The 22-year-old Thai star birdied the second hole of a playoff Sunday to win the LPGA Tour event for the second time in three years.

“When I’m thinking about winning, I never win,” Jutanugarn said. She became the 12th winner in as many events on the tour this season.

Jutanugarn and Hataoka both birdied the first extra hole, with Chun dropping out. The 19-year-old Hataoka putted first on the second extra hole and missed badly from just off the back of the 18th green before Jutanugarn rolled in a 15-footer for her eighth career victory.

“I couldn’t believe I played in a playoff in such an early stage in my career,” Hataoka said. “I’m just going to try to keep going for the rest of the year.”

Jutanugarn started the day two shots behind Chun and used a stretch of five birdies in six holes to build a two-shot lead before making bogey at the par-5 15th,, one of the easiest holes on the course.

“After that I got a little bit mad, but my caddie just told me … we can’t go back and change anything,” she said. “All we can do is just what we have now. Try to hit a good shot.”

It was the eighth top 10 finish of the season for Jutanugarn, the only player on the women’s tour to have made the cut in every event she’s played.

It was the fourth playoff in the history of the tournament.

The tournament was cut from 72 holes to 54 when rain washed out play Saturday.

Megan Khang was fifth after her third straight 67.

Brittany Marchand of Orangeville, Ont., finished at 3 under, while Maude-Aimee Leblanc of Sherbrooke, Que., was at 1 over.