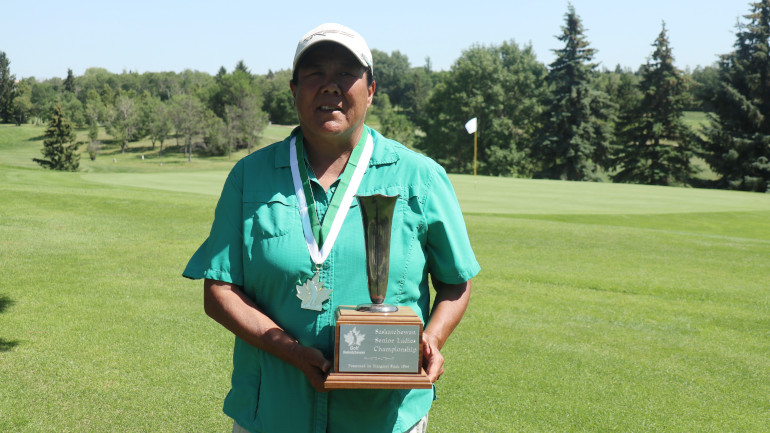 Tammy Bezaire and Rick Hallberg are both provincial senior golf champions for the second time. Bezaire was the women’s senior champion in 2015, Hallberg won the men’s title in 2018.

On Thursday at Yorkton’s Deer Park Municipal Golf Course Bezaire fired a final round score of 7-over, 79 to hold off three-time champion Jo-Anne Schiller by five shots. Over 54 holes, the Togo, Sask. product was 26-over par. She said having a chance to play an event and catch up with friends makes the win more special.

“This was a good win,” she said after the round. “The course was in fabulous shape, I just love seeing the girls, it’s like a big reunion and that’s always fun. The first one is really good, but this is nice to get out and golf with your friends.”

Under normal circumstances, Bezaire would lead Saskatchewan’s team into the national event but, due to COVID-19 that is cancelled. Bezaire said she’s disappointed but still happy with another provincial win.

“This is good, it would be nice to go to Quebec, but this is a really nice course,” she added.

Schiller (below) wins the silver medal as well as the Mae Belmos Award (60 plus) at 31-over par. Denise Wilson of Swift Current was third at plus-37.

Weyburn’s Rick Hallberg, like Bezaire had to fight back over the final couple days of the event to win his second championship in three years.

Kenosee Lake golfer Paul Grimes held the lead after round one, but Hallberg responded on day two with a 4-under, 68 taking the lead and cruising to a three-shot victory over Prince Albert’s Cliff Selander. Hallberg said winning his second championship feels great.

“It feels pretty good, I had good week. Had a great time with all the guys and had a ball,” he said.

Hallberg won his first senior title on his home course of Golf Kenosee. He said wining in Yorkton has a different feeling.

“It feels pretty good to win on the road. I haven’t played up here in Yorkton for 12-13 years, so the course was kind of new to me again, but the guys were great in the proshop, the grounds crew did a great job keeping everything in nice shape for us. I can’t say enough about Deer Park for taking on the task of hosting this event,” Hallberg said.

Selander shot a solid 3-under, 69 on day three to earn the silver medal. Saskatoon’s Warren Proctor finished in third place at 13-over par.

Delisle’s Colin Coben (below) was the super senior (65 – 74) winner. There was no 75 or older competitors this year, those players compete for the legends trophy.

In the third year of the Saskatchewan Mid-Master’s Championship for players over 40, it was hometown product Derek Stykalo going wire to wire for the win. The victory is the first provincial championship for the long-lasting Deer Park club champion.

Stykalo led the event after day one and never relinquished the lead finishing at 5-under, 211 over 54 holes. He said winning a Saskatchewan title is special.

“It feels pretty good, really good actually,” he said after the round. “It came up last minute that we we’re going to host this and to play the home track and win, it’s a bit of dream come true to be a provincial champion.”

Stykalo finshed 10 shots ahead of both Chris Reid of Meadow Lake and Hallberg. Melville’s Doug Kreklewich placed fourth at plus-11.