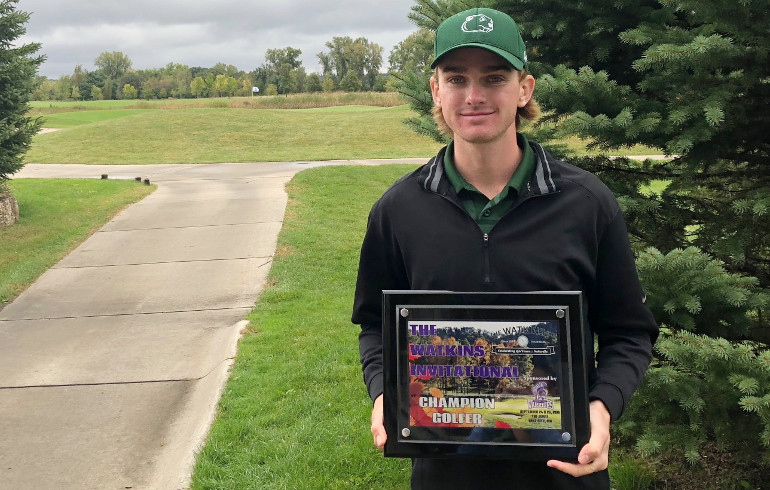 The 23-year-old Minot State University (MSU) student captured the JR Watkins Invitational on Sept. 25 at the Jewel Golf Club in Lake City, Minnesota by three strokes. Bearchell grew up in Moose Jaw where his dad was the assistant professional at the Hillcrest Golf Club. Bearchell said golf has always been a part of his life leading to the victory.

“I started competing when I was 13 or 14 years old through the Maple Leaf Junior Tour (MJT) and Golf Saskatchewan events,” he said. “I did pretty well in those and I ended up getting coaches interested in me to pursue college golf. It was a long road, but it’s been fun so far.”

Competing in the two-round event for the third time, Bearchell said the familiarity with the course helped him shoot 69 during round one and 73 during the second round on route to the victory. He said chasing an elusive win was well worth the result.

“It is something I’ve wanted to do since I started playing collegiate golf, it’s awesome to get this one. It was my week I guess. I was hitting the ball well, I was staying aggressive to my targets, the putts fell, it all worked out,” Bearchell said.

His college career began in 2013-14 at Wayland Baptist University in Texas. Bearchell then transferred to MSU and will graduate later this year. Despite making a move during his collegiate playing days, he said the experience has been incredible.

“It was an adjustment going from high school and living at home to living on your own in a different place. I’m pretty comfy here and I’m enjoying myself,” Bearchell said.

Next up for Bearchell and his Beaver teammates is the Cog Hill Invitational at the Cog Hill Golf Course in Lemont, Illinois. Bearchell was recognized for his performance this week by the Northern Sun Intercollegiate Conference, he was named Athlete of the Week on Wednesday. With a few tournaments left he said he hopes to finish his career on the right track.

As for his future in golf he hopes to compete in amateur events and find a career once his schooling is complete.

“if everything goes planned I will have a degree in marketing and management and get into the real world.”