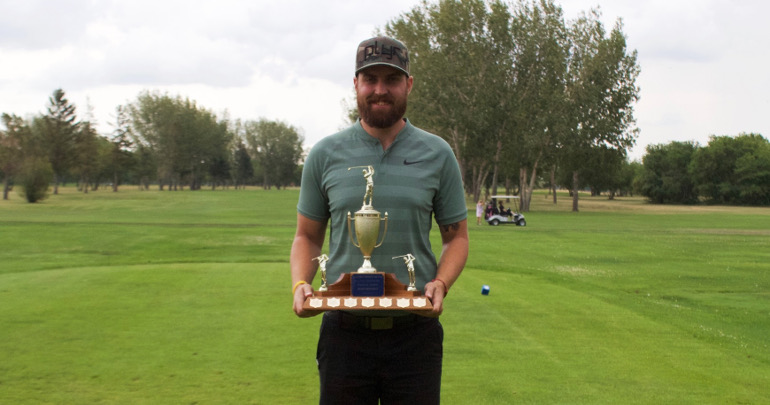 Benson and Lepine are good friends off the course and have played plenty of rounds together on the course, which gave both golfers an extra feel of comfort heading into the playoff.

“Nick’s my best friend, so it was like we were just out playing,” said Benson. “We were kind of back-and-forth all day and we both didn’t finish the way that we wanted to, but with five holes left, we were like, ‘This is our time, we’re finally going head-to-head,’ and it’s too bad he missed that putt on the last hole, but it was fun.”

Lepine credits Benson with getting him into golf and added that it was a fun experience to battle his friend in a playoff.

“I never really golfed until I started golfing with Trevor, so even to be able to play in a playoff with Trevor is pretty cool, at this caliber too, it’s not just a Sunday or weekend round, it’s a tournament that means something, so it was pretty cool,” said Lepine.

Lepine had a few chances to close out the title, he put his tee shot tight on the 128-yard, par-three second hole, but had to settle for a two-putt par.

On the third playoff hole, the 513-yard, par-five third hole, Benson hit his tee shot behind some trees and had to chip out before flying his wedge shot over the green. Benson was able to finesse his chip in tight to recover and make a par.

Lepine had his chip from beside the green come up short and then he missed his par putt to give Benson the title.

“The missed putt on three and I had that putt for birdie on the second playoff hole, it just wasn’t my day,” said Lepine. “The last five holes, we were back-and-forth and the same thing in the playoff, it could have gone either way.”

Benson, Lepine, Chris Knopp and Bill McLean were just one shot off the lead heading in the final round. Tyler Muench held the solo lead after firing an opening round 68 at the Lynbrook Golf Club on Saturday. Knopp had the shot of the first round when he aced the par-three, 159-yard fifth hole at the Lynbrook.

The second round started on the right foot for Benson, but he cooled off on the back-nine to finish with a one-under 70, which had him level with Lepine, who also came in at one-under 70 on Sunday.

“The first hole I made an eagle, so I kind of got things rolling quick. I was three-under through three, but then I made a couple of bad bogeys,” said Benson.

“I haven’t golfed a ton this year, so the expectations weren’t really there, today was my tenth round of the year, but I just kept it in the middle and putted really good. My chipping was atrocious all day, even in the playoff until that last one.”

Muench fired a one-over 72 on Sunday to finish just one shot out of the playoff.

Knopp shot a two-over 73 and ended up three shots back in fourth place, while McLean posted an 80 on Sunday to end up ten shots behind Benson and Lepine.