Beating the odds, Bulmer believes best is yet to come 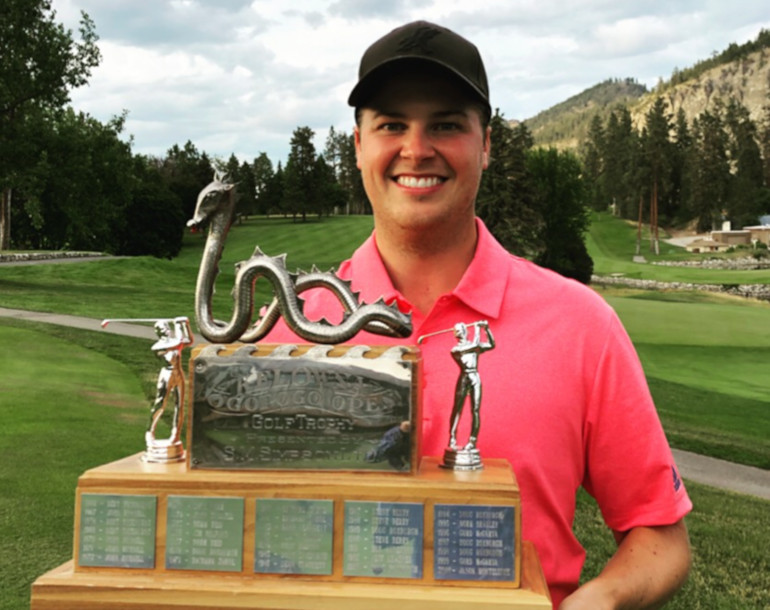 Troy Bulmer after winning The Ogopogo in Kelowna this past season.

Growing up in Melfort, and then Saskatoon, Troy Bulmer golfed, a lot, most of the time with his father.

Rod Bulmer was an accountant by day, by night a father on the course with his son as much as possible, and between the two of them, they were often found in the winner’s circle. The Melfort Men’s Open was a huge tournament for western Canadian golfers, the elder Bulmer won the event “several” times according to Troy. Rod was also the Saskatchewan amateur champion in 1984. Troy won the 2005 under-15 provincial title, a year later he was the under-17 victor.

Rod had a stellar amateur career, Troy was on his way to more wins, then everything changed.

In August of 2010, Rod was driving his son back to college in Misenheimer, N.C. when their car was toss from the road by a tornado in North Dakota. Rod was killed, Troy suffered serious injuries, but survived.

In July of 2011, Troy won the Saskatchewan amateur title as well putting his name on the same trophy as his late father.

“That’s obviously a huge point of personal pride as well as for my family and friends, that was a very significant moment,” Troy said to Golf Saskatchewan last week. “Twelve, thirteen months before that it didn’t look like I was going to be able to play golf again because of the damage I sustained. That was a huge piece. To have the same championship as my dad has, that’s hugely important, it’s very meaningful. Especially now, it’s something I can look back on and say as much as it was a point of satisfaction or goal I had, it was almost a personal reassurance that I was going to be ok. Regardless of losing dad or not, our names will be tied to a piece of history.”

The Bulmers joined the Stewarts (Ron and Dave) as the only other father-son combo to win the amateur championship.

Bulmer now calls Vernon, B.C. home and is still very involved in golf playing “as much, wherever possible.” He enters events in the Vancouver Golf Tour, State Opens and the McKenzie Tour keeping the 28-year-old busy. This past summer he won his first event as a professional, the storied Ogopogo at the Kelowna Golf & Country Club. The Predator Ridge member stormed back from four shots down on the final day to win the 68th running of the tournament that had a field of 162. Bulmer said the win had significance thanks to Mike Smith, a long-time friend of his dad’s as his caddy during the championship.

“By proxy that’s the closest thing that I could get to having dad around, it was really nice having Mike out there caddying. Someone to talk with and after the completion of the event basically realizing it would be my trophy and my tournament that I had won, it was very nice of him to say, your dad would be very proud of you. It was very nice for Mike to remind me of that,” Bulmer said.

Still healing from his injuries after the amateur win, Bulmer felt a warmer climate would be beneficial for his health, and his game. Only practicing a couple times per week, he started to play more in the B.C. and had success pushing him on.

“Over a span of a couple weeks I set five course records, and that was without practicing or playing that much,” Bulmer explained. “I figured I would go down south and play a couple Mini-Tour events and just see where the game is actually at. Those Mini-Tour guys grinders are good. Whatever the mental hang-up or getting out of their comfort zone, whatever the case me be that they don’t progress further, those guys that have made money on the Mini-Tour are good golfers.”

Chasing a PGA TOUR card is still the goal for Bulmer. He will continue to play through the qualifying school of the McKenzie Tour and work from there. He did admit that as determined as he is to make the dream work, time doesn’t stop.

“It’s something that is within grasp, but at the same time you need to see it in a timely matter,” Bulmer explained. “You can’t spend three, four years grinding it out on the McKenzie Tour and another handful on the Korn Ferry Tour. Playing professional golf isn’t a cheap thing to do, so it’s going to be one of those with results and success becomes that much more exposure to yourself and that much more opportunity to pursue it. Right now I’m all in on progressing my game.”

Saskatchewan currently has about ten players, both men and women playing college golf in Canada and the United States. Some may have professional aspirations; others might be using the game to get their education. Whatever the reason and their goals, Bulmer said his eyes were opened once he climbed to the higher level after his college career was complete.

“When you go out and play, yeah your short game, your putting can be great, but you are not shooting 63 each day hitting it to 25 feet or putting it up-and-down for par all day. My greatest recommendation which when I was first out there I caught on really quick, we’re finding ball striking and trying to get closer to the hole is. Sixty-nine isn’t good golf anymore at this level. If you are shooting 69 or 70 everyday you are going to go awfully hungry,” he said.

Bulmer works at Predator Ridge during the season and has a girlfriend who also plays golf out of the Okanagan course. In the off-season Bulmer works for one of the resorts in the Vernon area.

You can hear more from Bulmer below in his interview with Golf Saskatchewan’s Clark Stork.