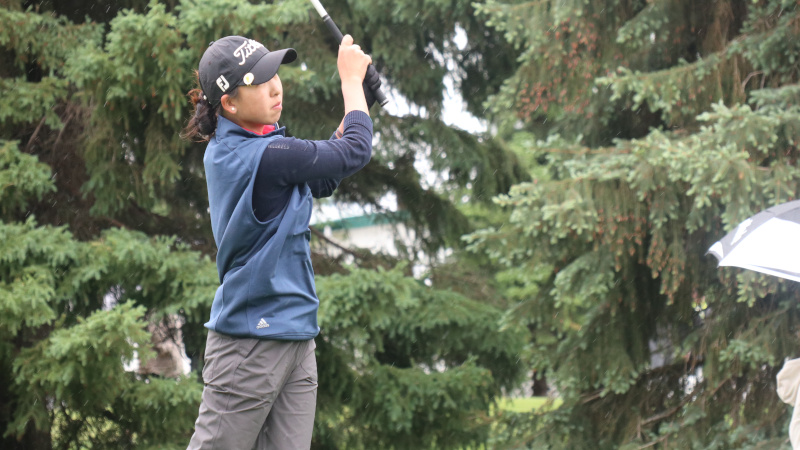 Hyeji Yang of Langley, B.C. is the girls leader at the Future Links Prairie Championship.

Two out of province golfers tackled a saturated Deer Park Municipal Golf Course Saturday and will take leads into the final round of the Future Links driven by Acura Prairie Championship on Sunday.

Hyeji Yang, of Langley B.C. is the 36-hole leader in the girl’s category in Yorkton after posting her second straight round of 75. The second round was pushed back five and a half hours but that didn’t deter Yang from scattering three birdies and six bogeys over the round. She managed to avoid any double-bogeys in at points, a driving Saskatchewan wind.

Yang will take a three-stroke lead into the final round over fellow B.C. golfer Sherry Yang. The Richmond based player sits at nine-over par in second place. Brooke Frerichs of Calgary rounds out the top-three at plus-12. Regina’s Autumn Neiszner is the top Saskatchewan girl she’s in fourth at plus-19.

The girl’s leaderboard can be seen here. Their first tee time is Sunday at 8:50 a.m.

On the boy’s side, Tae Kyoung Yun of Richmond Hill, Ont. followed up opening round of 74 with an even-par 72 to leapfrog first round leader Richard Dou. Dou was the lone player to shoot under par in the event but fired a six-over, 78 on Saturday to drop back to a tie for third with Winnipeg’s Jacob Armstrong at plus-four.

Saskatoon’s Josh Nagy stayed right in the hunt, the Riverside Country Club member shot 74 Saturday, couple that with his first round of 73 and Nagy is at three-over par in third place.

Neel Soni of Winnipeg is within striking distance at plus-five, Estevan’s Chase Gedak is still in the hunt as well after being in second place after the opening round. The TS&M Woodlawn player from Estevan sits in sixth at seven-over.

The boy’s leaderboard can be found here, their tee times begin at 7 a.m.

The top five boys and top five girls (plus ties) will qualify for the national junior championships later this summer.