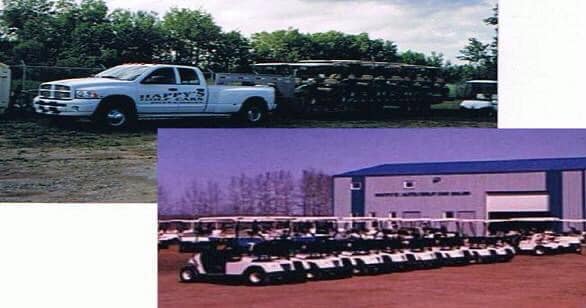 With what started as a side venture to assist a friend and subsidize farming transitioned to three decades of the Happy’s Golf Car Sales and Service serving the golf industry in Saskatchewan and beyond. In a Facebook post this week, Marie Happy announced she has sold the business to Wynyard NAPA and will retire.

Marie and her husband Don officially started the cart retail and service business in 1992, again as a side job along with farming but as their business grew farming was no longer possible and in 1998, they relocated to a property near Good Spirit north of Yorkton for its centralized location. Marie said as their business grew they watched courses such as Green Acres in Balgonie, the Wynyard Golf Club, Sherwood Forest, Flowing Springs and others develop as well over the years.

“We watched them blossom, some started with basically four cars in their fleets. These courses have grown to large fleets and new clubhouses. They have really blossomed over the years,” she said.

Don was highly regarded as a golf car mechanic and word travelled far and wide. Marie said in the founding days of the business he was on the road a lot paving his way to find work as well as customers that became vey loyal over the 30 years of their operation.

“That’s what really got our name out there,” Marie added. “Everyone recognized Don’s truck and he was at the regular courses we had fleets at or sold fleets to. He was there once every couple weeks kind of thing and when he was there they always said it was like someone threw fresh meat out because the flies just flocked, the customers would just show up.”

Over the years Marie said she got quite good at stocking Don’s truck with parts and items regular customers needed allowing him to do the work people required. She said clients from as far as Ontario would bring work to them. One gentleman transported a torn apart cart engine all the way to Saskatchewan to have Don rebuilt it for his cart. They serviced Manitoba regularly plus Alberta clients with Yorkton ties.

After Don passed away in 2018 Marie admitted she couldn’t just step away, their clients relied on them. Despite not having a mechanic anymore she continued with the business for three more years.

“I had become pretty good at diagnosing over the phone in a lot of cases,” she chuckled. “I followed Don around a lot as a gopher, so I was able to pick up on a lot of things. I just didn’t want to leave our customers empty handed; they had relied on us for 30 years.”

Aside from watching courses grow and develop into community hubs and meeting places Marie said they watched the overall sport develop from a white-collar senior based crowd into a game for everyone to enjoy, especially families taking up the game.

“When we started it was the well-established senior retirees kind of thing more so than the everyday working class, at least that’s what it seemed like from our perspective. Then it grew after that especially in the rural courses, it was the families and junior golf has really taken off,” she added.

As mentioned, Wynyard NAPA will take over the business and Marie will take time to herself likely devoting much of that to her two grandchildren and her daughter’s family. She said she hopes to find more time to golf now as well. She did want to send a message to their devoted clients over the 30 years of Happy’s.

“I just want to say thank you for the loyalty that everyone gave us over the years. It was really overwhelming that people kept coming,” she concluded.