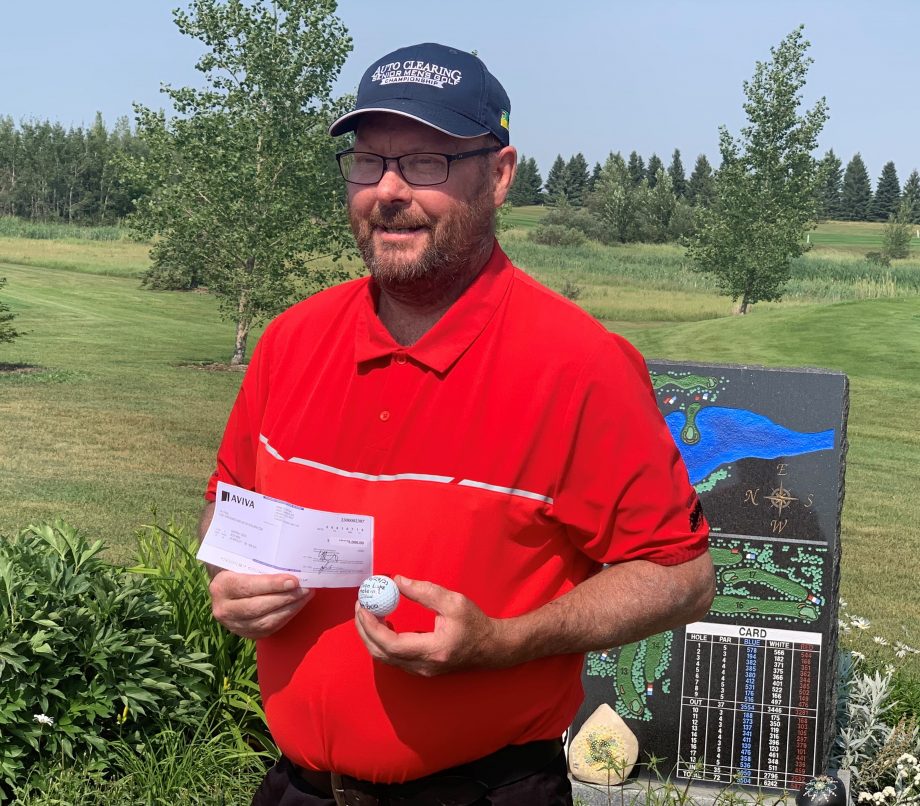 Three and a half years ago Humboldt’s Murray Lees concluded stem cell transplants to battle cancer, along the way doctors suggested golf would no longer be in the cards for the former business owner and pastor. Lees has an extra $5,000 that proves them wrong.

Lees, a regular on the Saskatchewan Senior Men’s Order of Merit Tour (OMT) dropped his third career hole-in-one earlier this season during the Auto Clearing Senior Men’s Championship at Moon Lake Golf and Country Club earning the prize payout. He received his cheque in the mail from the event chair this week and spoke with Golf Saskatchewan at the Humboldt Golf Club after the funds arrived.

“Unfortunately, I didn’t have my glasses on so that was the one sad part was not seeing it, just hearing my partners yell and scream which was really good,” he said when asked about the 170-yard shot on hole four at Moon Lake’s Highlands.

“Very little went through my mind, I’m playing and I didn’t want to lose my focus. The guys were yelling and screaming and I’m going, so what. I guess after the round I started thinking about it and thought, it’s pretty cool to win money on a stroke,” he added.

Lees was born and raised in Melfort before becoming a business owner in Humboldt in 1988. He is a fixture in the Humboldt community and on the course in the city. Being a pastor for 25 years, faith is close to his heart as well as his wife Glenda’s. The pair was recently contemplating what to do with the money they admit isn’t needed in their account.

“We have a camp, our hearts are very much in camp ministry, there is camps at Stony Lake and Torch Trail Bible Camp and we’d like to help kids go to camp, some of the money will go to that. We just talked about it today about maybe having a golf tournament in Melfort or somewhere for a fundraiser for at-risk kids that can’t go. We don’t need it, we’re old fogies, we’re just going to be helping out kids,” Lees concluded.