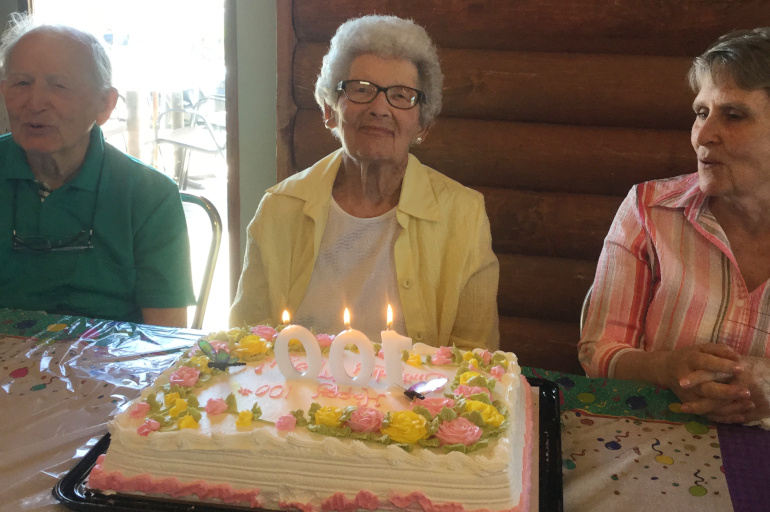 Golf is advertised as a game for life; potentially nobody knows that more than Moose Jaw’s Mickey Gower.

On Tuesday, July 23 at the Deer Ridge Golf Course, Gower’s 100th birthday was celebrated. Gower still golfs twice a week at the club where she’s been a member for over the last dozen years. She was a long-time member at the Hillcrest Golf Club but transitioned to the executive par-three Deer Ridge over a decade ago. Gower’s husband was in the Air Force and the couple moved several times, but golf was always something they did no matter the location.

“I started golfing when we were first married and he was working in the Air Force,” Gower told Golf Saskatchewan during her birthday celebration. “We moved to different towns for his work and we were in Yorkton at the time. I had never golfed much, but my husband played at Deer Park and there was a tournament that they wanted me to golf in and I said ‘no, no, no.’ Well, I ended up playing in it and I think I doubled the score. From then on, I golfed with my husband in every community we ended up in.”

Gower was also a member at the Lynbrook Golf Club during her years in Moose Jaw. When she started golfing at that club the greens were still sand. She transitioned to the Hillcrest when the curling rink became part of the facility as Gower still curls in the winter. She said being active is the secret to a long, healthy life.

“I think it has a lot to do with being in sports, I really do. Without sports, you don’t get the exercise. When I was younger, I played tennis and ball and I have met so many people through sports,” she said.

The Deer Ridge clubhouse was packed for her centennial celebration with family, friends, and other members of the club in attendance. Gower said the day was a perfect way to recognize the milestone.

“I just think it’s marvelous. All the people that came. I have been contacted by so many people, I can’t even count,” Gower said. “Everything has been super. Denise Corrin [Deer Ridge golf course owner] is so nice. I loved every minute of it.”

Gower passed along a thank you to everyone who attended the event, she also provided a message to young women growing up in today’s world.

“Try to obtain what they have always dreamed of being. There is always a way, if you really want something,” she said.

Corrin said the club was ecstatic to host Gower’s birthday party and said the day was memorable.

“It was a special day for us and her,” Corrin said. “Mickey is our oldest female golfer ever. We have a gentleman who is 94 who is our oldest male. To be above 90 and still be able to go out there and hit the ball is just phenomenal.”

Corrin added that having Gower at the club still playing two times a week adds to her incredible life story.

“I think it’s amazing, I think it’s amazing just to be on the right side of the grass,” Corrin beamed. “She doesn’t look 100, she doesn’t act like she’s 100. She’s an active lady and I think she is as healthy as she is because of how active she is. Golf is one of the few things at 100 years of age that is not too hard on your body that you can still manage to do.”